Arsenal crashed out of the Europa League last night at the hands of Olympiakos as Pierre-Emerick Aubameyang missed a guilt-edge chance in the closing stages which would have seen the Gunners progress.

Super-fan Piers Morgan has told the striker to hold his head up high despite the poor finish though.

He claims Arsenal would have been relegated from the Premier League this season if it wasn’t for Aubameyang.

He tweeted: “Agonising for this guy. I’d have bet my house he’d score again with that last shot.

“But even geniuses are fallible. Hold your head up Pierre-Emerick ⁦@Aubameyang7 ⁩ – you’re the ONLY reason we aren’t facing relegation this season. 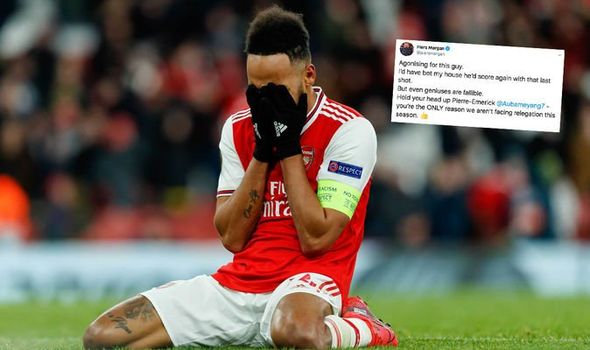 Pape Abou Cisse netted the opener on the night for Olympiakos as the Greek side forced extra-time at the Emirates.

Aubameyang then found the net in the 113th minute and thought he had won it for Mikel Arteta’s side.

But it wasn’t to be as Youssef El Arabi poked home with one minute to go in extra-time.

Aubameyang then had a chance from five yards out but somehow put his effort wide meaning Arsenal were dumped out of the Europa League.

After the match, Arsenal boss Arteta admitted the defeat hurt a lot.

He said: “It hurts, big time. We had a lot of hope in this competition.

“It was a great way for us to be able to go to Europe and it is a very beautiful competition to try to win. 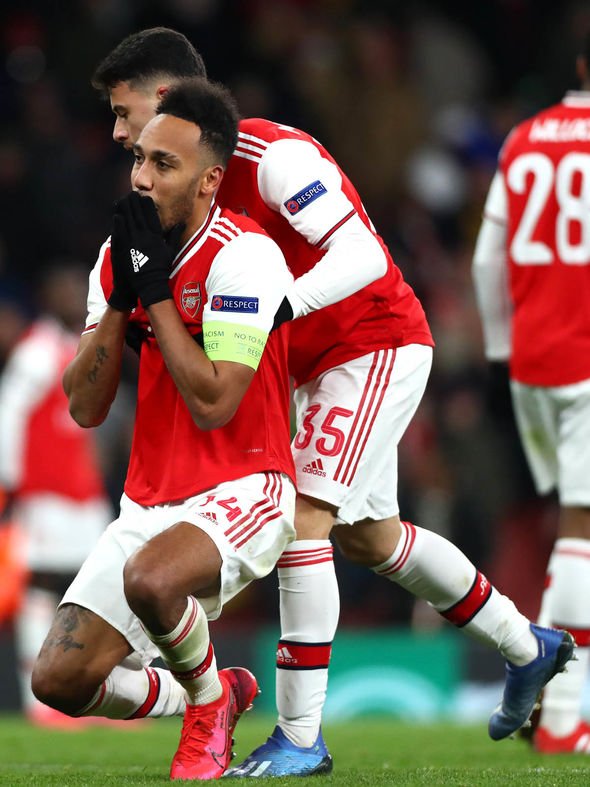 “I think we did a lot of positive things in the game.

“I think we created enough chances to win the game, but if you concede two set-pieces again in a tie like this, then you put yourself in big trouble.”

Arteta also said Arsenal need to take their chances when they create clear openings like they did against Olympiakos.

He added: “I think we have enough goal threat in this team, but we have to put the chances to bed and in Europe it’s in both boxes.

“In the opponent’s box, we missed chances that should have been goals and in our box there were a few things that they had and they put them in.

“On the set-pieces we were vulnerable again so these are things to improve.”

Arsenal now turn their attention to an FA Cup fifth round clash against Portsmouth on Monday evening (7.45pm).