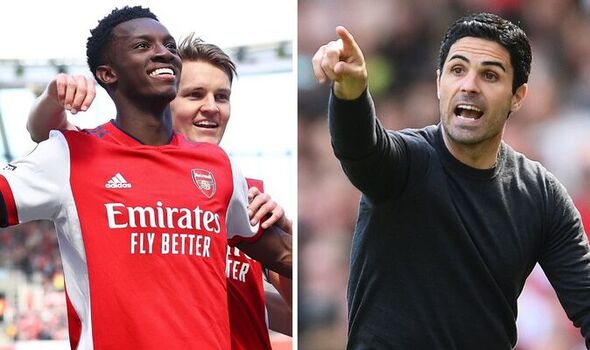 Arsenal boss Mikel Arteta wants Eddie Nketiah to be left alone from answering questions on his immediate future after his brace against Leeds with the belief “things will happen naturally”. Much has been made about Arsenal’s striker situation ahead of the summer window with both Nketiah and Alexandre Lacazette out of contract at the end of the season.

Lacazette had been the preferred option to play through the middle initially after Pierre-Emerick Aubameyang left to join Barcelona in January. But the Frenchman’s lack of goals forced Arteta into a change with Nketiah being given his chance.

He soon repaid Arteta’s faith with two goals in an emphatic 4-2 win over Chelsea last month. The 22-year-old continued to lead the line for Arsenal in consecutive wins over Manchester United and West Ham before finding the back of the net twice in Sunday’s win over Leeds.

It’s now four goals in as many games for Nketiah with the striker playing a key role in Arsenal’s fight for a top-four spot. His upturn in form has raised questions as to why Nketiah remains out of contract heading into the summer.

But Arteta has refused to offer any hint that situation will change following the win over Leeds. Arteta said: “Let him be. Let him enjoy the moment and things will happen naturally.”

For the latest news and breaking news visit /sport