Arsenal 0-4 Barcelona: Catalans dismantle Arsenal for a second time this season to progress through to the knockout stages of the women’s Champions League

We may only be halfway through the season, but UEFA can probably start engraving Barcelona’s name on the women’s Champions League trophy now.

The Catalans dismantled Arsenal for a second time this season, winning 4-0 at the Emirates, and they didn’t have to get out of second gear.

Barca have now qualified for the knockouts as group winners while Arsenal are all-but their as runners-up. They would have to lose 5-0 against Hoffenheim next week to be eliminated. 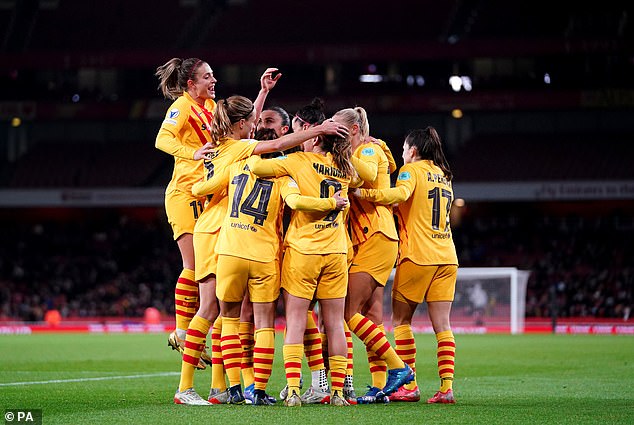 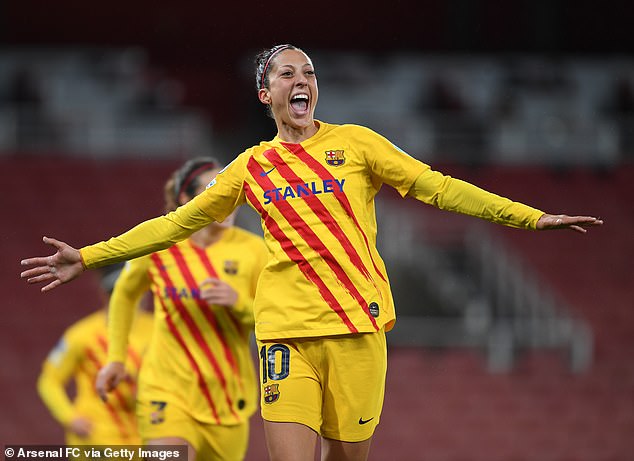 It will be tough for any team to stop the Spanish giants from conquering Europe once again. Chelsea, who they convincingly beat in last year’s final, have improved and six-time winners Lyon look a strong force once again. But winning has become a habit for this Barca side.

They lost just once in the league last season, a 4-3 defeat against Atletico Madrid when the title had already been won. They also lost just once in Europe, a 2-1 defeat by Manchester City in the second leg of their quarter-final after they had won the first game 5-1. 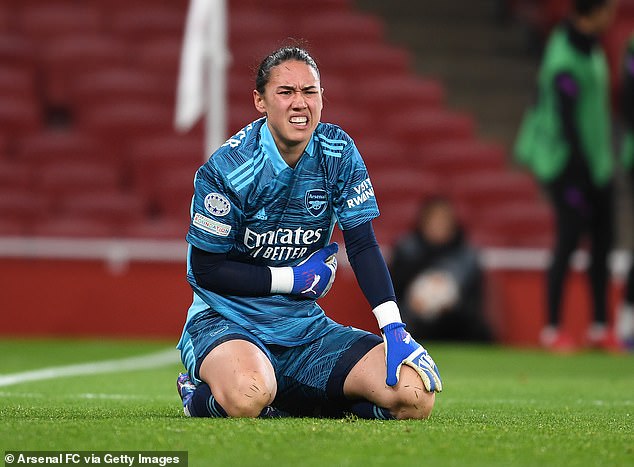 While, Arsenal are likely to go through to the next round as Barcelona’s runners-up 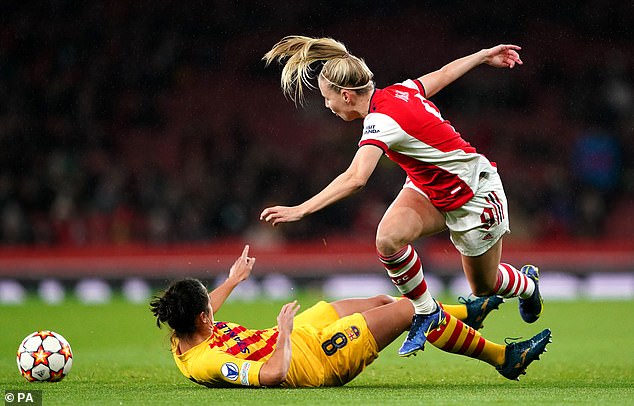 They have scored 72 times in the Spanish league this season, an average of six goals a game. Only four goals have made it past their defence in all competitions. They have now beaten Arsenal 4-0 twice.

What is most frustrating for Gunners boss Eidevall is that Barca’s first two goals were completely avoidable.

Arsenal had made a steady start for the first 20 minutes before a careless back-pass from Jen Beattie gifted Barca the opener.

Only Beattie knows whether she was passing to goalkeeper Manuela Zinsberger or centre-back partner Steph Catley but the ball went in between the two and was intercepted by a grateful Aitana Bonmati, who then held off a challenge from Catley to finish into the bottom corner.

The second was another defensive mishap as Fridolina Rolfo’s cross was missed by both Beattie and Catley. It was not missed by Jennifer Hermoso, however, who reacted quickly to side-foot into the back of the net. Zinsberger got a foot on the ball but could not keep it out.

Rolfo then scored the pick of the goals just before half-time. The left back cut inside and fired a right-footed shot into the top corner.

The second half became damage limitation for Arsenal. Barca seemed content with keeping possession and conserving their energy for the duration of the game. They have El Clasico on Sunday, not that Real Madrid currently provide them with much competition. They are 19 points behind Barca in the league with five wins, five defeats and two draws.

The Catalans should have had a fourth goal in the 70th minute but Zinsberger made a brilliant double save to deny Caroline Graham Hansen and Hermoso. Rolfo’s cross was met by substitute Hansen but the Arsenal goalkeeper saved at her near post before getting up quickly to block Hermoso’s re-bound with her shoulder.

But a fourth did come minutes later when Zinsberger pushed Hansen’s cross out to Hermoso, who did just enough to force the ball over the line.

Beth Mead should have scored a consolation when she was put through on goal by Lia Walti, but her shot was saved by the legs of Sandra Panos before Manu Iwabuchi fired the re-bound high and wide.