Melbourne Victory has secured its financial future after the death of former director Mario Biasin, with an American private investment firm to add the A-Leagues club to its growing network of teams across Europe and South America.

777 Partners, a Miami-based private equity firm which owns stakes in La Liga side Sevilla, Serie B team Genoa, Paris-based Red Star FC and Brazilian club Vasco De Gama, will be unveiled as Victory’s newest shareholders on Wednesday, the Herald and The Age can reveal.

The firm is believed to have taken on a non-controlling stake in Melbourne Victory, with their investment the first by a foreign entity in the club’s 17-year history. Anthony Di Pietro is expected to remain chairman.

777 Partners is also the owner and backer of new low-cost Australian airline Bonza, which is set to commence operations later this year, and was revealed as Victory’s major sponsors earlier this week.

Bonza replaces Metricon Homes, the company co-founded by the late Mario Biasin, on the front of Victory’s jersey. Biasin, who was one of Victory’s biggest shareholders, died suddenly in May, leaving the club in a precarious financial position and necessitating a search for further benefactors. Last month, this masthead also reported details of a legal battle between another investor Joe Mirabella and former managing director Richard Wilson, who had been trying to sell off his 2.31 million shares in the club to fans at $2.20 per share.

Founded by Josh Wander and Steve Pasko, 777 Partners has been eyeing off a possible move into the A-Leagues for approximately a year, settling on an arrangement with Victory after discussions with other groups seeking to join the competition through expansion. 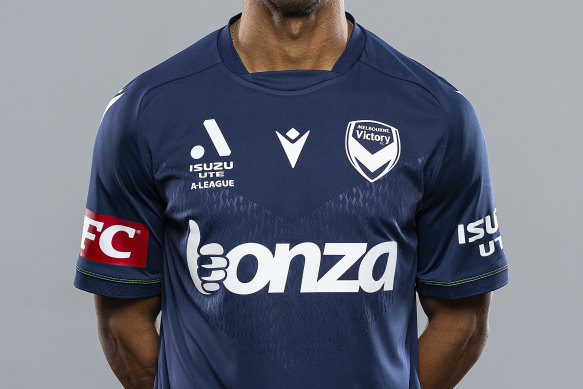 Bonza is the new major sponsor of Melbourne Victory – and now the airline’s owners, 777 Partners, have bought into the A-League club.Credit:Getty

After acquiring Genoa in September last year, the firm has since bought into Vasco da Gama, Belgian club Standard Liege and Red Star FC, who play in France’s third division. The multi-club network brings Victory into line with crosstown rivals Melbourne City, who are owned by the Abu Dhabi-controlled City Football Group and have sister clubs in England, Japan, France, Italy, Uruguay and the United States.

In May 777 appointed Don Dransfield, the former chief strategy officer at the City Football Group, to head up their global football operations.

“777 Partners is a company based in Miami, we are a holding – I insist – we are not an investment fund,” Wander told French newspaper L’Equipe recently in response to fan unrest over their deal to buy Red Star FC.

“We have six main areas we work in: insurance, aviation, sport, media, and entertainment. We support many companies around the planet but not to investment funds – I am in charge of the business and there are no other external investors.

“What is important in our eyes is not to build a club which generates profit just for the sake of profit. We want clubs that are capable of living and developing over a number of decades.”