Dean Pearson has a routine, as most match-going fans do. After 49 years as an Elland Road attendee, it’s as ingrained as waking up and brushing his teeth.

For Saturday, it would have followed a familiar path. Starting at The Plantation pub in Middleton with his fellow members of the South Leeds Independent Supporters group (SLI), of which he is the chairman. With it being only a couple of miles from the ground, a couple of drinks would be supped. On this occasion, it would have included chewing the fat over an engaging performance against defending champions Liverpool, a few nods to the defeat on penalties to Hull City in the League Cup.

At which point, as some were into the dregs of that second or the more optimistic were gulping a third, a double-decker bus would turn up to take them to their 3pm kick-off against Fulham. From south Leeds, the roads take them past other home fans making their way to the ground. Fans not necessarily affiliated to SLI but who are accustomed to waving them down at a stop and hopping on. “It’s more of a community bus than a supporter’s bus,” Pearson says.

Arrival time is generally 2:15pm. Enough for a couple more on the concourse and some sustenance to reinforce the stomach. One at half-time, too. “There’s a decent amount of drink involved, not too many, but it turns the nerves around, doesn’t it?” He’s not wrong.

The turnaround at full time is usually swifter. Just the 15 minutes to meet the bus for the journey back to homes, more drink or both. The post-match analysis would have begun right after the final whistle, but here it would continue until sleep comes calling.

Alas, that is now a different world. Instead on Saturday Pearson will watch the game where he has done over the last few months since fans were prohibited from attending matches due to the pandemic. At home with those closest to him. No part-timers. “I’m not one for watching football in a pub with people who were not bothered bit are nor suddenly bothered,” he tells The Independent. “I’d sit with the right bunch of people and discuss sensibly through it, not listening to victimising certain players for doing something wrong. I can’t abide by that.”

As Premier League football returns to the home of Leeds United for the first time in 16 years, after near-misses, relegation to League One and countless false dawns, he will not be the only Leeds fan embracing an alternate experience through gritted teeth. But, to a man, woman and child will do so with pride, dismay, satisfaction and feelings of emptiness that a group of players who have taken a club back to where it belongs will run out at home devoid of the heroes welcome that now feels like a privilege taken for granted.

He was there for that last day of top-flight football at Elland Road, as songs sung in defiance bellowed out through the tears against Charlton. Relegation brought with it a tragic twist to a club who over-indulge their ambition and flew too close to the sun.

Since then, fans have come and gone. Some through ambivalence. Others through life. Some of those who knew of Leed’s glory years through the 1960s and 70s under Don Revie have sadly passed on. Those more recent remember the league title of 1991/92 and the Champions League run in 2001.

A newer generation has grown in the time since Leeds were last here, youth who have no recollection of what Leeds once were. Pearson has been a constant. The sage informing those who only knew of the dramatic decline that Leeds did at least fly, and how high.

But he and 30,000 others will not be on hand to ring in the new. And while there will be full hearts and tears when the Premier League paraphernalia adorns Elland Road once more, those badges on the white shirt carrying the weight of medals of honour, those tears will be partly because of what they as fans are missing. The wait is over, but the yearning remains.

“I was there for that Charlton game,” Pearson says of the last Premier League fixture (or Premiership as it was then) at Elland Road. The 3-3 draw officially sealed relegation though it was already in motion the game before after a 4-1 defeat away to Bolton Wanderers. “It’s still heartbreaking. It still feels like yesterday. Even though we knew our fate the game before, the heart still ached.”

The atmosphere that day was mixed. Many had their dramatic emotional release after the Bolton result, which put Leeds six points from safety with two games to go but a vastly inferior goal difference. Though there were more tears here, the state of play over the previous month had many resigned to the drop.

“It felt like a farewell to our players,” recalls Joe Mewis, editor of Leeds United Live who was also in attendance. “We had a lot of talent in that squad and we knew they were going to be picked off. Players who had been part of the Champions League semi-final side (back in 2001).” 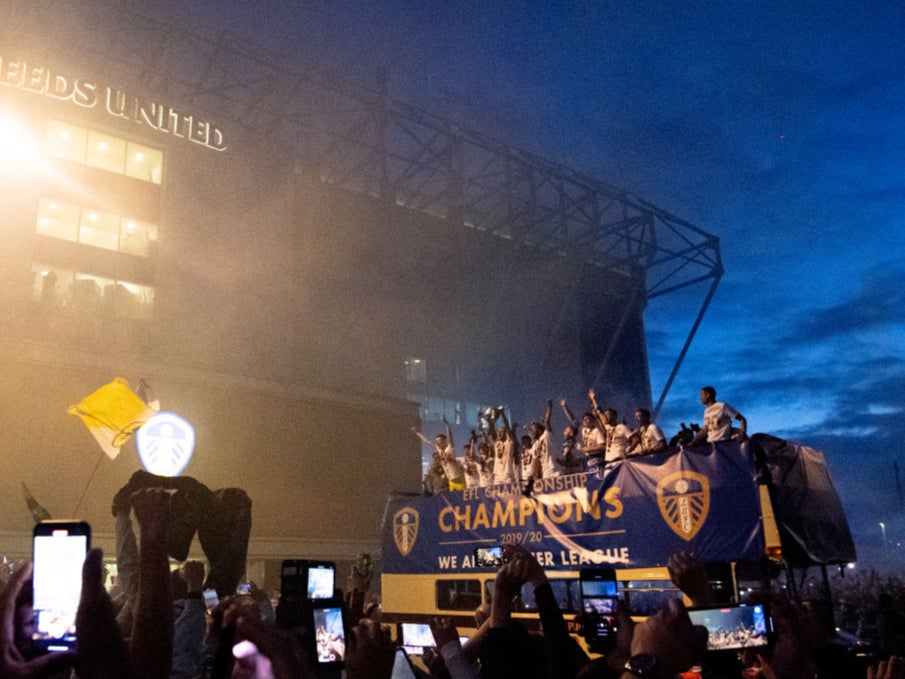 Leeds would be relegated further in 2007 before returning to the Championship after three seasons in League One. Then, after coming within touching distance of promotion in 2018/19, they made the toughest step of all. Yet it still felt hollow to some, including Dean.

“Some of my best memories as a Leeds fan are when we as supporters were all together. I remember in 1989/90 when we were promoted under Howard Wilkinson. I was in Bournemouth on that weekend. There was a bit of trouble which was a shame. But we were in Christchurch and it was a fantastic. You know, it was almost better than when we won the league in 1991/92. The atmosphere was great. It’s a feeling I will remember for the rest of my life.

“So to go from that, to sitting at home watching Huddersfield Town v West Brom and us winning promotion and celebrating with a bottle of wine and a kebab on my own was a bit bittersweet.”

“Even though it was a fantastic feeling,” says Dean, “it felt like we didn’t even get that sensation of kicking a ball to confirm our moment. We had a barbecue planned for the Sunday, with bottles of champagne all geared up for the celebration. We popped the champagne and it came out flat, you know?

“It’s devastating to some people. Winning promotion the way we did felt a little bit hollow as a result, even though we were dead chuffed.”

Their time will come. Perhaps not in 2020, but certainly in 2021. The opening day performance at Anfield was promising beyond the 4-3 scoreline against them. Not least that here was a group of footballers whose million miles an hour style is as much a concoction of the mad scientist Marcelo Bielsa as it is of their vociferous support. As such, the performance on the opening Saturday felt like a tribute to those who could not be there. And it was noted. “When they ran out at Anfield, the hairs on my did neck stand up. I can say it’s a shame we’re not there. But maybe the bigger picture is the club is where it deserves to be.”

The opposite has been true in the past, mind. “The crowd at Elland Road does seem to have a profound effect on our players,” explains Mewis. “There have been periods in the past when consistent under-performers have been made to feel really small. But under Bielsa and with this team, it feels different.”

At 3pm on Saturday, many like Pearson will be indulging familiar yet hopefully temporary routines. Though the rules around the number of people he is allowed to have around at his home have changed, one friend, in particular, will be there.

“He came and watched the remaining games of last season at my house. So now I’ve got to invite him every time because he won’t watch the game anywhere else because we kept winning. Once the ban is lifted and we are allowed back at Elland Road he might be staying at my house if Leeds are doing well!”

“I might just give him the keys,” says Dean, weighing up the trade of his house to return to a place that has always been home. “I just want to go back.”