Home » Soccer » ‘A great honour’: The Aussie coach who traded Arsenal for Juventus

As the wait continues for Ange Postecoglou’s unveiling at Celtic, another highly rated Australian coach has landed a gig at one of Europe’s biggest clubs.

Joe Montemurro has joined Juventus as head women’s coach, tasked with not only continuing the Italian club’s trophy-winning streak but capturing the one piece of silverware that has so far eluded them: the UEFA Women’s Champions League title. 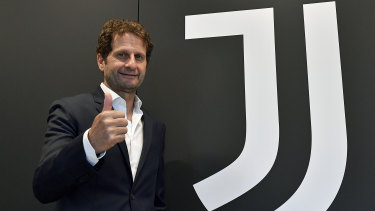 Joe Montemurro has gone from one European giant to another at Juventus.Credit:Getty

Montemurro, 51, is regarded as one of the top coaches in women’s football. He has just finished a four-year stint at Arsenal, guiding them to the 2018-19 FA Women’s Super League crown – their first in seven years. Before that, he won the W-League double in 2015-16 with Melbourne City.

Overlooked for the Matildas job late last year when Football Australia opted for Tony Gustavsson, the pressure will now be on Montemurro to keep the titles coming at Juventus. The club’s women’s division has only been in operation since 2017, but the Bianconeri have won the Serie A title every season of their existence under the same coach, Rita Guarino, who is now departing. Last season, they won all 22 league games to finish 15 points clear of second place.

Winning a fifth consecutive domestic championship will be the minimum expectation for Montemurro. Much like their men’s team, Juve’s next target is European success, having never gone past the round of 32 in the Champions League.

“The goal is to keep Juve high in Italy,” Montemurro said in Turin after officially signing his contract with Juventus chairman Andrea Agnelli and vice-president Pavel Nedved, the former Czech international. “A great job has already been done to be No.1 in Italy, and now we want to go a step further in Europe

“We have to convince ourselves and believe we can do it – this is important – and to play very nice football and win games obviously.

“I can’t describe the emotions I have inside. Being here, in a great club like Juventus, is a great honour. First of all, I was a Juventus fan as a child, so when I had this opportunity to come to Juve, seeing the growth of women’s football in Italy … it was a very easy choice.”