Ageing footballers taking the first steps into retirement by purchasing a relatively unknown club is far from a new revelation.

David Beckham at Inter Miami, the Class of '92 with Salford City and now Cesc Fabregas with Serie B minnows Como, these ex-Premier League stars have all laid down their post-playing plans with radical ideas to transform their new clubs to the top of their respective divisions.

But whilst everyone knows about the former Manchester United men and their ventures across the Atlantic and closer to home, several other top-flight aces have been pummelling in the pounds without the attention of the media spotlight.

Former Arsenal and Chelsea icon Cesc Fabregas has penned a two-year deal with Serie B outfit Como, where he will combine his playing duties with an off-the-field role as part-owner.

The World Cup winner was announced in the glorious northern Italian sunshine holding Como's new sensational sea-inspired alternative kit, with plans to buck the trend of releasing a new strip every season by making the new kit last five years.

HAVE YOUR SAY! Should footballers be allowed to own clubs whilst they're still playing? Let us know in the comments section. Blues icon Dennis Wise is employed as a Technical Consultant on behalf of the owners and is believed to have played an instrumental role in convincing Fabregas to head to Lake Como.

"He owns part of the club, he's a shareholder," Wise told The Mirror. "That's what Cesc wants to get involved in. He'll be here a lot longer than expected really. It was important, he felt that way, to be part of it going forward long-term. He could see what we're trying to achieve at this football club.

"There's a lot more to be done at the football club regarding where we want to end up, in Serie A. He sees it as a good opportunity and I'm pleased he's on board." Hanging up his boots at the end of the 2020/21 season following a brief spell with Swiss Super League outfit FC Lugano, Demba Ba had already been laying down the foundations for life after football retirement, co-founding North American Soccer League franchise San Diego 1904 in 2017.

Utilising a plethora of star-studded contacts, Ba linked up with former team-mates Eden Hazard, Yohan Cabaye and Moussa Sow for the start of the 2018 season, where he was installed as club chairman.

Losing a major source of financing at the end of 2021, San Diego 1904 merged with Albion SC Pros to form ASC San Diego, but Ba still remains the chairman. After returning to Stamford Bridge to claim one final Premier League title, Didier Drogba saw out the final seasons of his playing career in America, first with Montreal Impact before transferring to Phoenix Rising in the USL.

"Happy to announce I have signed with @PHXRIsingFC and will be part of the ownership group hoping to take Phoenix to the MLS #Drogba2PHX," tweeted the Chelsea legend in 2017, making him the very first player-owner in football history.

The Ivorian retired a year later but still remains involved in the club's administrative side. The three-time Ballon d'Or winner immediately invested £58million into the Copa do Brazil side after acquiring a 90% stake, aiding the club to a seven-point lead at the top of the table midway through the season.

Also owning a 51% share in Real Valladolid, Ronaldo became the majority shareholder in September 2018 forking out a fee of around £25m. Previously, Ronaldo held a minority stake in NASL club Fort Lauderdale Strikers Whilst presumed to be seeing out his playing days in the MLS with LA Galaxy, Zlatan Ibrahimovic purchased 23.5% of the shares in Swedish top division outfit Hammarby IF, which were sold by the owners of his current employers.

The sale didn't go down well with fans of former club Malmo FF. Supporters were furious that their former star had opted to invest in another top-flight side and have since vandalised his statue outside Eleda Stadion.

The Swedish sensation is not anticipated to feature for AC Milan until midway through the 2022/23 season after undergoing surgery on his ACL at the end of the previous campaign. 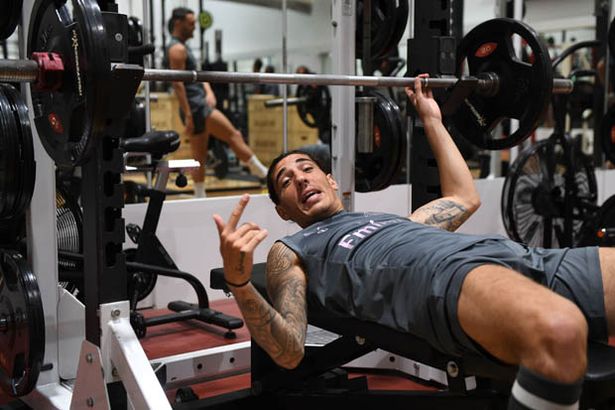 After adopting a vegan lifestyle in 2017 and advocating for footballers to do more to raise awareness of environmental issues, Hector Bellerin invested in Forest Green Rovers, the world's most environmentally friendly team.

The Arsenal full-back became the second-largest shareholder, behind chairman Dale Vince, in September 2020, praising their commitment to veganism as well as becoming the world's first carbon-neutral sports club.

"So many people feel there's no solution to the world's problems, but Forest Green are already doing plenty," said Bellerin upon investing in the Gloucestershire club. "I'm so excited to be part of the FGR family. I'll be helping where I can, supporting people who want to change the world for the better." Cesar Azpilicueta is a part-owner of Isthmian League North Division side Hashtag United, which was founded by YouTuber Spencer Carmichael-Brown in 2016.

The internet side, buoyed by a mass following of 602,000 subscribers on YouTube, has undergone a mass rise since its inception with two promotions in the first three seasons – including the curtailed 2019/20 campaign.

Azpilicueta was appointed to the club's board in April 2020 but his affiliation goes further back, with the Chelsea captain filmed wishing Hashtag a happy third birthday in 2019.