Home » 31-0: The Australian world record that led to claims of racism

You would think that setting a world record and becoming a cause celebre in the biggest sport on the planet would have nothing but upside.

But for Archie Thompson, the former Melbourne Victory and Socceroos striker who set a yet-to-be-equalled global benchmark 20 years ago on Sunday, there were mixed results. 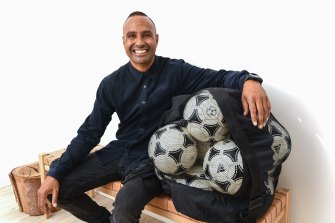 Former Socceroo Archie Thompson on Friday, with 13 soccer balls, representing the 13 goals he scored against American Samoa in a world record in 2001.Credit:Joe Armao

Notoriety, as much as fame, has accompanied the now 42-year-old ever since April 11, 2001, when the Socceroos smashed the minnows of American Samoa 31-0 in a World Cup qualifier at Coffs Harbour.

Thompson scored 13 of those goals, catapulting him up the all-time national team scorers list and making him forever the answer to a trivia question: who has scored the most individual goals in a World Cup qualifier?

At the time, Thompson was a 22-year-old wannabe who had his sights set on a long Socceroos career and a lucrative move to a European league, both of which he achieved before returning to become the A-League’s first local superstar.

“I didn’t realise until after, when people were saying it was a world record, with all that hype, I thought, that’s pretty cool,” he reflects. 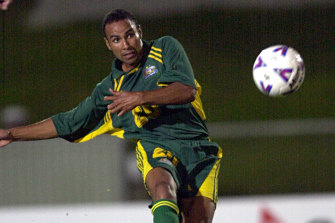 Thompson scores one of his 13 goals against American Samoa in 2001 in Coffs Harbour.Credit:Getty Images

“But it maybe didn’t help me that much when I went soon after to Lierse in Belgium. In one way it was great having a world record and being part of history, but on the other hand in Europe everyone expected it of me every week.

“I think the expectation was probably a little bit too high. It hindered me a bit … everyone would come up and say ‘this is the guy who scored 13 goals’ but they didn’t realise we were playing against kids who were not technically that great.”

Frank Farina, who was supervising his first Oceania World Cup qualifying campaign as coach, had long felt that Australia should not have to play minnows like American Samoa in qualifying games given the gulf in quality that often led to mismatches.

Farina felt that the Socceroos should be moved into FIFA’s stronger Asian qualifying region (a shift that eventually occurred under Frank Lowy’s leadership in 2006).

‘I got accused of being a racist because we didn’t take our foot off the pedal.’

If that could not happen, his argument was that the tiny Pacific atolls and small nations that made up most of the Oceania region should play a pre-qualifying tournament with only the best two or three coming through to take on Australia and New Zealand in a final group.

Armed with a squad full of players based at big European clubs (including captain Kevin Muscat, Craig Moore, Tony Popovic and the Vidmar brothers Aurelio and Tony but missing Harry Kewell and Mark Viduka), Farina decided to make a point.

“I got accused of being a racist because we didn’t take our foot off the pedal, some people were saying that the big guys were beating up on the little guys,” Farina recalled.

Bonita Mersiades was the Socceroos’ team manager at the time and she admits that the slaughter was hard to watch.

“I remember Frank had asked me to do something at half-time and I had a quick word with him and said somewhat naively, ‘Aren’t you going to go easy on them in the next half’. 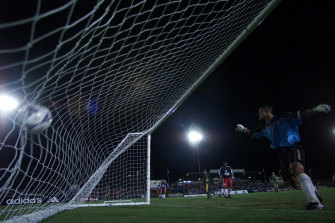 American Samoa keeper Nicky Salapu was in the goal that night.Credit:Tim Clayton

There were repercussions for some of the Socceroos. James Montague, in his book Thirty-One Nil: On the Road With Football’s Outsiders: A World Cup Odyssey, told how Glasgow Rangers’ Dutch coach Dick Advocaat told him that he had dropped Socceroos Moore and Tony Vidmar for Rangers’ clash with Dundee in disgust at the 31-0 scoreline.

The American Samoan team had been further weakened because many of the squad couldn’t make it to Australia for the tournament because of visa problems, while many junior internationals who might have been back-ups were still at school doing exams. Some players had not played in a 90-minute game before.

The game was scoreless for the first 10 minutes until midfielder Con Boutsianis scored; then the floodgates opened and Australia led 16-0 at half-time.

It could have been worse but for American Samoa’s goalkeeper Nicky Salapu, then 20 and the only regular first-team squad player on the trip.

He produced a string of excellent saves but is forever resigned to being the yang to Thompson’s goalscoring yin.

“I wish I could go back and play against Australia, but you can’t change anything ,” he says in the film about the game, Next Goal Wins. “It’s going to be there [in the record books] for a long time. It’s an embarrassment.”

Salapu had to wait a decade more to conquer his demons until American Samoa finally won a World Cup qualifying game in 2011, when they beat Tonga 2-1.

“I feel like a champion right now. Finally I’m going to put the past behind me,” he said after that game.