Do Man City need to sign a striker this summer?

Due to Kane’s outspoken desire to win trophies and City’s need for a striker after Sergio Aguero’s recent transfer to Barcelona, the move makes sense on many levels.

However, Spurs chairman Daniel Levy is notoriously difficult to deal with in the transfer market, while City, despite their vast riches, have never committed an astronomical sum to just one player.

With this in mind, here are three alternatives Pep Guardiola’s side could call on this summer:

Although no concrete offer has been tabled for Lukaku’s services just yet, the Belgian has had another sparkling season in Milan, surpassing the 30 goal mark for the second term running.

Lukaku does not fit the playmaking, false nine mould that Guardiola has deployed up front with success this season, instead representing a physical target man with the pace to threaten in behind.

Chelsea are supposedly interested in re-signing their former striker, although it is unknown whether the history between player and club would be a help or hindrance when it comes to finalising any potential deal.

Although Lukaku is virtually indispensable to Inter thanks to his ruthless goalscoring form, they do need to raise cash through player sales this summer to balance the books.

This could open the door for City to do business, but with the likes of Achraf Hakimi and Lautaro Martinez both flirting with the exit door at the San Siro, the Italians may not need to part with their star striker after all. 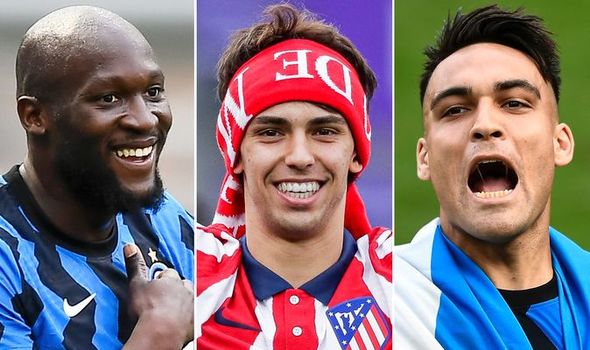 Although Joao Felix now has a La Liga winners medal with Atletico Madrid, his career has failed to take off in the way his 2019 Golden Boy award suggested it would.

Still, at just 21-year-old Felix has plenty of growing room, while he certainly fits the brief of a front man who has the technical ability to drop deep, link play and invite runners in behind from elsewhere in the side.

Despite this, Felix has failed to hit double figures in the league across each of his two seasons in Madrid since his blockbuster £113m transfer from Benfica.

That same move came with a jaw-dropping seven-year contract. One would have to assume that with five years of it left to run, City would have to part with some serious cash to land a youngster who still has plenty to prove in one of Europe’s top five leagues.

These are uncertain times indeed for Inter, as both of their star strikers are repeatedly linked with moves away from a club which just blew the rest of Serie A away to win the league title.

At just 23-year-old, Lautaro Martinez has played plenty of football and scored plenty of goals, notching an impressive 17 league goals this campaign and another 14 last season.

His short, bullish frame is eerily reminiscent of Aguero, not to mention the obvious Argentinian connection.

Although Martinez is young, he has enough experience to hit the ground running at The Etihad and seems a solid fit for Guardiola’s side.

Reports suggest Inter will hold out for £70m to prise him away from Milan, a sum which would break City’s transfer record, but big money would always be needed to replace a striker of Aguero’s calibre.