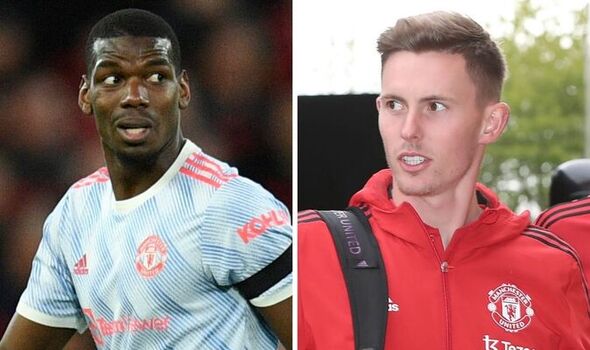 Manchester United stars could receive a hostile reception this evening in their last home game of the season with fans planning a protest against owners Glazers in the second half, and it may prove to be the last match at Old Trafford as a Red Devils player for a large portion of the current squad. Express Sport takes a look at 10 players who may well leave in the summer.

United’s fourth-choice goalkeeper will be leaving when his contract expires this summer. The 39-year-old joined United in 2018 and has only made a couple of appearances.

Another player out of contract in the summer and there will be plenty of interest in Lingard. West Ham have reportedly maintained an interest in the midfielder from his successful loan spell last season.

One of the longest-serving United players in the current squad, but he’s expected to announce his departure before the end of the season. It’s been suggested the 34-year-old could look to return to Spain with Real Sociedad being linked.

Pogba’s second spell at the club is set to come to an unceremonious end this summer. Fans continue to be divided on Pogba given his below-par performances for United but he remains one of the most coveted midfielders in world football due to his displays with France.

Another out-of-contract star who could make the switch to Spain this summer. The Uruguayan has struggled for fitness in the second half of the season, but could be on the bench this evening against Brentford.

Nothing is really known about what Cristiano Ronaldo plans to do when Erik ten Hag arrives this summer. The striker still has a year left on his current deal, but the potential of missing out on major European football for a season could well force him to look elsewhere.

The 25-year-old has been frustrated at a lack of opportunities this season and looks set to leave. Any potential suitor will need to stump up around £40m for his services though, which may put many teams off.

Recharging United’s defensive unit may well be one of Ten Hag’s first tasks and Eric Bailly could be one to depart. The Ivory Coast international wants regular minutes, but he remains behind Victor Lindelof, Harry Maguire and Raphael Varane in the pecking order.

Now appears the time for Jones to seek a move this summer with regular minutes needed after an injury-plagued 11-year stint at Old Trafford.

The midfielder confirmed last month that he will be leaving United at the end of the season after joining the club back in 2017.