Referee Mathieu Raynal claimed he warned Bernard Foley he would award a scrum to the All Blacks if the Wallabies five-eighth delayed the game in the final minute of the Bledisloe Cup Test last week, despite audio evidence to the contrary.

Raynal also pointed his finger into Nic White’s chest and told the acting Wallabies captain he was mistaken if he didn’t believe the French whistleblower would make such a big decision.

The comments from Raynal emerged in footage of an on-field exchange between the referee and White immediately after the full-time siren of the All Blacks’ controversial win at Marvel Stadium in Melbourne last week.

Only minutes before, Raynal had made the contentious decision to punish the Wallabies for time-wasting in the 80th minute after Foley took too long to kick a ball into touch after a penalty. Having trailed by 31-13, Australia were leading 37-34 and were in a strong position to win the first of two Bledisloe Cup games.

After Raynal gave the All Blacks the scrum feed, the Kiwis scored to win the game 39-37 and retain the Bledisloe Cup.

The decision to penalise the Wallabies for time-wasting was slammed by many, with former Wallabies centre Tim Horan labelling it “ridiculous”. 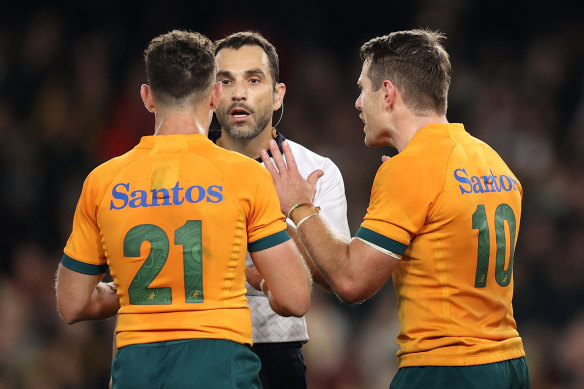 Foley said he wasn’t trying to slow the game down and thought time was off, and that he not only struggled to hear Raynal but also wasn’t aware such a harsh consequence was imminent.

“At the end it was very loud in the stadium, but there was no sense there was going to be a call like that,” Foley said.

In footage of the post-siren exchange between Raynal and White shown on Wide World of Sports, the referee claimed he gave a warning he would give New Zealand a scrum if Foley didn’t play on. With a Wallabies official watching on, Raynal pointed a finger in White’s chest.

“I tell you first, because you are the captain. Then to your ten. I give a warning, saying if you don’t play immediately I will give a scrum,” Raynal told White.

“So that’s not fair what you did. You just run the time. And you know exactly …if you think I am not capable to give a scrum and turn over ball, you make a mistake. So now you know it.”

A transcript of the referee’s communication during the relevant moment, via his microphone, does not contain any warning from Raynal that he would award New Zealand a scrum.

Nic White (holding ball) to Raynal: “Is the mark here?”

Raynal to White: “Play on please. We play.”

Raynal to Foley/White: “We play. Time off. We play.”

Foley to Raynal: “Okay. Yeah. Yeah. We have just got a lot of finishers.”

Raynal to Foley: “No, no. I will switch on the time and we play now.”

Raynal: “I will explain it.”

White: “This is a big moment. He was just about to kick it.”

Raynal: “No, captain. I said first we play, we play. Then I time off. I switch off the time. I say to your player I switch on the time and you play immediately. And he wait, he wait, he wait. So that’s a scrum for All Blacks.”

Earlier in the exchange, Raynal said, “Nic, I am sorry” before attempting to explain his decision. A frustrated White said, “Mate, that just cost us the Rugby Championship”, but otherwise remained quiet.

Owens tweeted: “As so many of you have been in touch to ask. Clear communication and warning to the player to get on with it. A fair and strong refereeing call by Raynal I feel. Learning here is not for the referee, but the players to get on with it when ref asks.” 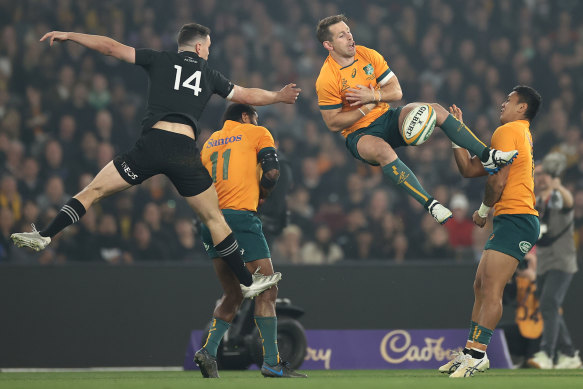 Bernard Foley of the Wallabies and Will Jordan of the All Blacks compete for the ball.Credit:Getty Images

Meanwhile, Wallabies back-rower Rob Leota is set to miss the second Bledisloe Cup Test in Auckland on Saturday after injuring his calf.

But in better news, skipper James Slipper has been cleared of a calf injury after sitting out the second half of the Melbourne Test.

Noah Lolesio and Hunter Paisami will be available for selection for the Eden Park clash after sitting out the first Test due to concussion stand-downs, although the form of Bernard Foley and Lalakai Foketi will make Dave Rennie’s decision a tricky one.

Darcy Swain will front a SANZAAR judicial committee hearing on Monday night after being cited for “dangerous and reckless” play when cleaning out Quinn Tupaea on his leg. Tupea suffered a serious knee injury at the ruck.

Watch every match of The Rugby Championship on the Home of Rugby, Stan Sport.