Suspended NRL player Bronson Xerri has set himself a new sporting challenge while he serves out his four-year doping ban: he wants to try and make it in the NFL.

Xerri has taken small steps towards that goal, touching base with at least one player agent with connections in the sport. Pacific Sports Management – the company that set another former Sharks star, Valentine Holmes, on his way to the US to try his hand at American football – will need to play a key role in his attempt to make it. The boss of that company, Chris Orr, is aware of Xerri’s desire to try to make it in the US. 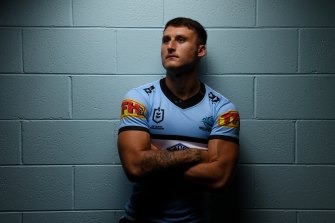 Xerri was banned for four years by the NRL’s Anti-Doping Tribunal on March 23 after he tested positive to testosterone in November 2019. His ban covers sports that are signatories to the World Anti-Doping Authority, but the NFL is not bound by the WADA code, meaning Xerri is free to try his hand at American football.

His speed and bulk give him a hope of making it in the big time, but he knows the huge amount of work that would be in front of him. The obvious hurdles are that he is a complete novice at the sport and that his attempt comes at a time when international travel is particularly difficult.

However, unlike Holmes (who spent several months on the New York Jets’ practice squad in 2019 and played in three pre-season games before being released) or Jarryd Hayne (who played eight games for the San Francisco 49ers in 2015 before quitting the sport in May 2016) Xerri has at least three years to make the switch.

In recent times Xerri has been filmed boxing – fuelling speculation he may try that sport – and until recently he has been training with sprint guru Roger Fabri. 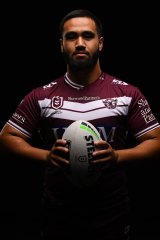 Keith Titmuss died after a preseason training session with Manly. He had just been elevated into the NRL top 30 squad.Credit:NRL Photos

When you watch the way Manly are performing you can’t discount the effect the tragic passing of Keith Titmuss has had on the players. The 20-year-old collapsed and suffered a seizure following a pre-season training session and later died in hospital.

Many of Titmuss’ best mates were there and watched it happen.

The significant impact it had on the training staff is also still being felt. It is not the main reason for the Sea Eagles’ dreadful 0-4 start to the season, but you need to remember the effect his death has had on vulnerable young men.

Daly Cherry-Evans is the easy target at Manly because of his position and pay packet. It has even led to rumours of a switch to Canterbury to play under his old coach, Trent Barrett. That story is not coming from DCE. Cherry-Evans wants to lead Manly out of their slump, not look for a new start. He is committed to staying with Manly and seeing the club through this tough patch.

The new 18th man concussion rule approved by the ARL Commission this week has prompted some worrying questions about the way head knocks are diagnosed.

Whispers from within the NRL suggest a spike in head injury assessments is due not to the faster game, but a tougher stance by club doctors. The theory goes that club medicos are being ultra-conservative and are more likely to stop players returning to the field after a head knock than in past seasons. If true, that should send a shiver through any players who previously passed their HIAs and were allowed to go back on the field. If doctors have raised the bar for returning to the field it suggests that some players in the past were allowed back when they probably should have stayed in the sheds.

A number of coaches and chief executives are concerned that the commission is operating at breakneck speed. It is being described as a “rule change of the week” following the introduction of the 18th man after the Sharks lost three players to concussions last weekend. But the solution – using an “emerging player” as a replacement, who can take the field only after three players have failed their HIA – is window dressing. The view is the new rule will never be used.

And if it is, it will not help a team battered by injuries to have a work experience player fill in.

The game’s bosses should have simply come and said what we know – that they are covering their backsides to help mitigate potential future legal issues. That’s good business and it is also far more palatable.

Wests Tigers are never far away from drama, and behind the scenes there is an issue at board level. Respected former Magpie Mick Liubinskas has lost his position on the board. The Magpies part of the joint venture is not happy.

For as long as I’ve known Todd Carney, fatherhood has always been a dream for the former star. Lion Daryl Carney was born on March 27. Congratulations.