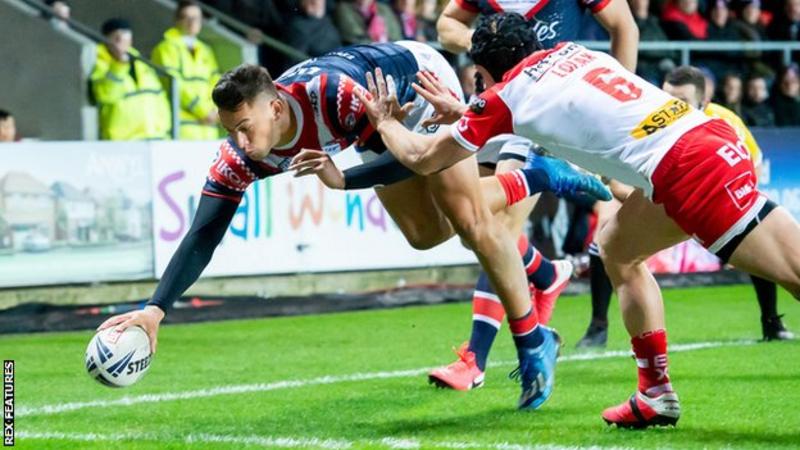 Luke Thompson powered over from close range to give the Super League champions the perfect start.

But the Roosters hit back to lead 8-6 at half-time as Daniel Tupou and Manu went over in either corner.

Manu’s second and a Luke Keary try sealed victory for the Australian side before Alex Walmsley’s consolation.

As well as setting a new record for number of wins in the World Club Challenge, Roosters also become the first side to retain the title having beaten Wigan last year.

Saints, who were chasing a third World Club Challenge win themselves, dominated the early stages and then kept pace with the Roosters for much of the game as the southern hemisphere side staged their fightback.

And the outcome might have been different had Kristian Woolf’s side taken their chances as they piled on the pressure at the start of the second half.

After Thompson’s opener, Tupou stormed through to silence the rapturous home crowd before Manu dived over in to opposite corner, after a succession of passes and good work from James Tedesco to put Saints under pressure, to edge the NRL Premiers ahead midway through an entertaining first half.

Their advantage could have been greater had Kyle Flanagan not hit the top of the left-hand post with his first conversion attempt and then the crossbar with his second.

There were boos from the home crowd on the verge of half-time after Tommy Makinson crossed in the corner only for referee Chris Kendall to rule it out because of a forward pass from Kevin Naiqama in the build-up.

Just after the restart they were denied again when Makinson dived for the the line only for video referee Robert Hicks to rule that he was short.

Flanagan failed to convert for the third time in a row after Manu’s second try to keep Saints to within six point of their opponents, but Keary’s long-distance effort ensured Easts added another title to their collection.