London Irish winger Ollie Hassell-Collins has been one Premiership’s breakout stars this season and caught the eye of England coach Eddie Jones… and the ‘Cat Dad’, model and Harry Potter fanatic is also keen to make an impact off the pitch

As rugby looks to grow in profile and engage a wider audience outside its narrow current perimeter, the sport needs more players like Ollie Hassell-Collins.

The London Irish wing and England hopeful is not afraid to stand out from the crowd. On the field, his 10 Premiership tries and impressive form this season saw him catch Eddie Jones’ eye.

Off it, Hassell-Collins is not your average latte-sipping, Call of Duty-playing rugby ace. He takes his three cats Betsy, Albus and Marmalade on walks, loves tattoos, and is a Harry Potter fanatic. 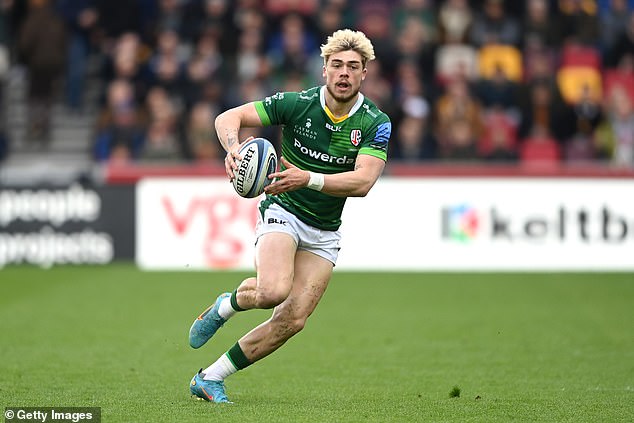 Recently, he has caught the attention of several fashion brands, taken some initial steps into the modelling world, and become an ambassador for the charity Rugby Against Cancer.

‘I think we’ve seen progress in how rugby is trying to grow,’ Hassell-Collins told Sportsmail.

‘It’s hard because sports like football and Formula 1 have obviously done it for years. We can’t expect to be like that overnight and it might take a few seasons to get there, but I think rugby definitely can. I think there are more boys now doing their own thing. Look at someone like Joe Marler who is almost the face of rugby because of the way he is off the pitch.

‘I think as players we are able to express ourselves however we want to. With the way the world is going, it’s all about how you are off the pitch. Obviously you have to perform on it and put the team first, but at the same time building your own brand is important. 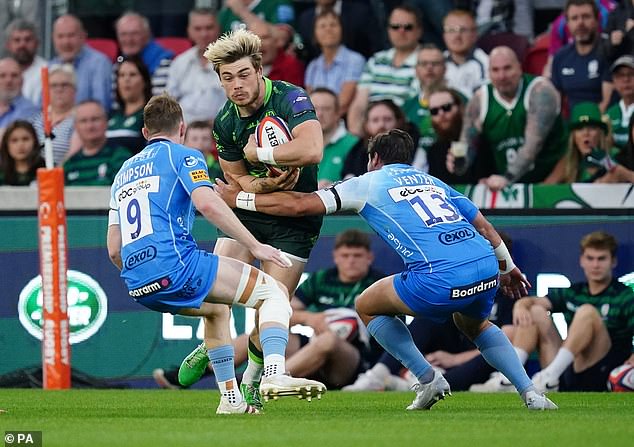 ‘If you have the right people around you they can help you with that.

‘I’ve said to the people I work with what I’m interested in and if there are people out there in those areas who want to work with me, then we can have a look.’

Hassell-Collins, 23, was a member of England’s Six Nations squad earlier this year but he is yet to win a cap and wasn’t selected for head coach Jones’ most recent training camp.

He continued: ‘At Irish we’ve built an environment where we can be ourselves and be comfortable doing that. I’ve managed to bring that into my home life and express it through my social media. 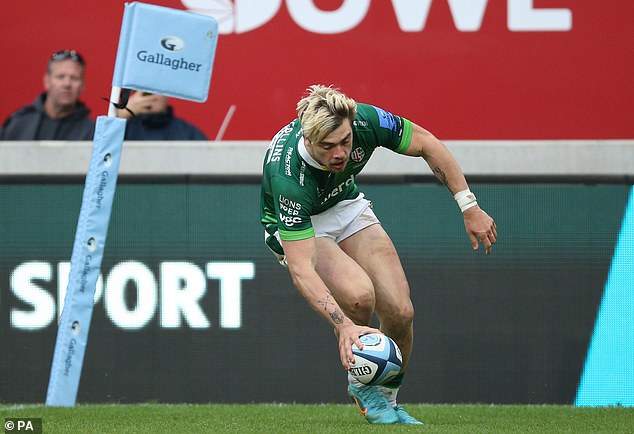 ‘I try to open up to my followers so they can learn a little bit about me rather than just what I’m doing on the pitch. I’m just on Instagram at the moment. I’m not into TikTok and all the dancing!

‘A few of the England boys asked about my cats. The main question I had to deal with in camp was about walking them. Eddie actually started calling me “The Cat Man” whenever I saw him!

‘He said he wasn’t into cats, but I did show him pictures. One of our cats has got quite big and he thought that was quite cool. I’ll keep him updated!’

At a recent lunch to mark the 60th birthday of the Rugby Union Writers’ Club, England’s 2003 World Cup-winning No 8 Lawrence Dallaglio rightly lamented the sport’s inability to sell itself to the wider world. Saracens and England lock Maro Itoje has also sent out the same message. 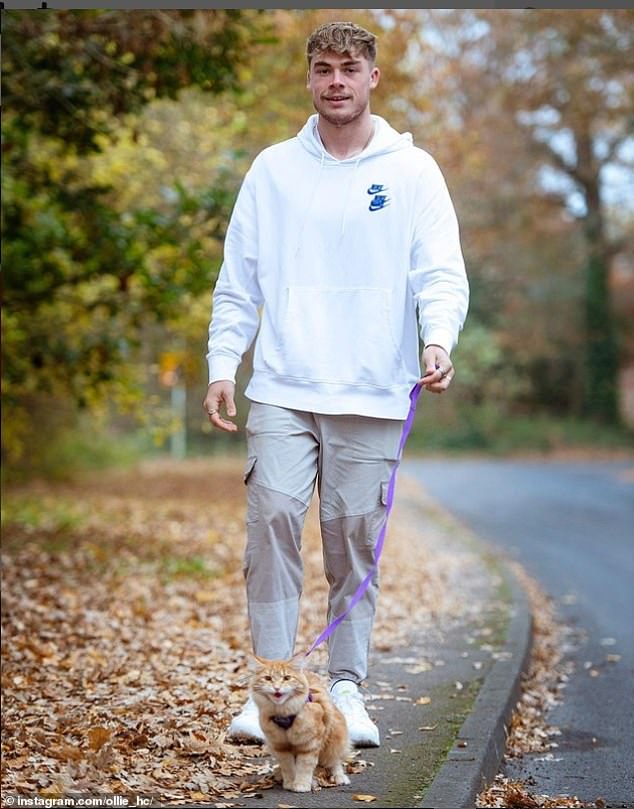 Hassell-Collins likes to take his three cats Betsy, Albus and Marmalade on walks

Rugby’s team ethos is of vital importance and one of its enduring traits, but arguably it has led to a reluctance from some players to put their heads above the parapet.

To trouble sports like football and F1 in the global conscious, rugby needs superstars on which to brand itself. Right now, the truth is very few of them exist.

Rugby did take a step in the right direction with the release of ‘Prep to Win – Harlequins’ on Amazon Prime, but out-of-the-box initiatives like this need to become the norm not the exception as they are now. Hassell-Collins is not a household name just yet, but he is getting there.

He has been one of the Premiership’s breakout stars this term and hopes to win a first England cap on this summer’s tour of Australia. 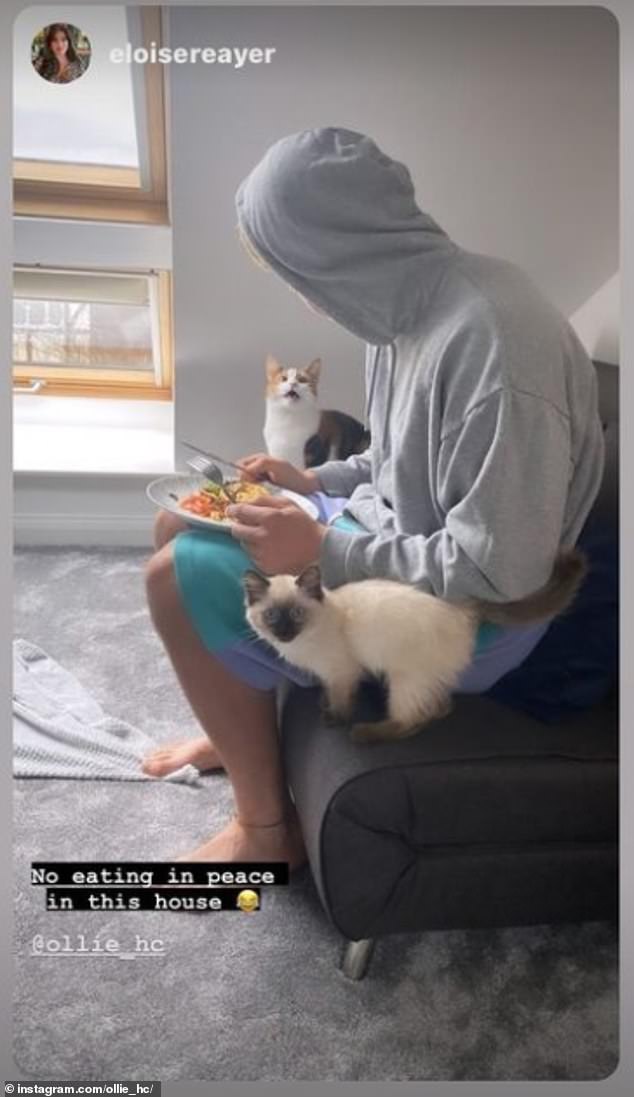 The 23-year-old is not your average latte-sipping, Call of Duty-playing rugby ace

‘A few of the England boys were in for Harry Potter – Freddie Steward was one,’ Hassell-Collins laughed. ‘The cats were the big thing – I had my girlfriend Eloise send me videos of them.

‘I only FaceTimed her to see them! I spent quite a bit of time with Marcus Smith and Freddie. Maro is one of those guys who is doing well off the pitch and has done some pretty cool stuff.

‘That’s something I’d definitely look to do in the future.’

Hassell-Collins is part of a vibrant, young Irish outfit and the club look to be on the up with a promising academy pushing players like Henry Arundell and Will Joseph through. 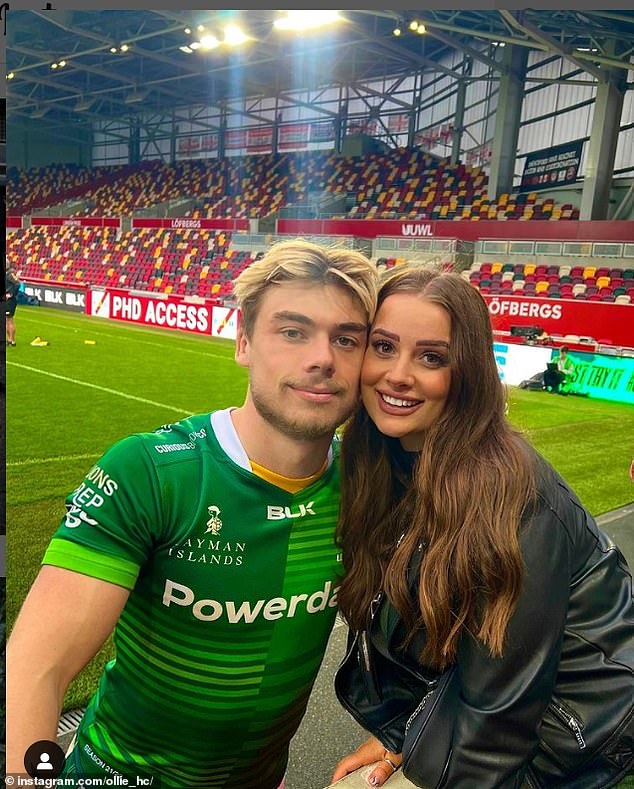 ‘It’s always frustrating when you don’t get picked, but I loved every minute of being with England in the Six Nations,’ said Hassell-Collins. ‘With the players you have around you, it’s impossible not to learn. I got some good feedback from the coaches to take on board.

‘The big thing was the consistency and level of quality I need to have in training. In the England environment everyone is trying to prove themselves and I need to bring that to Irish.

‘I need to train like an England player every day. I know what I need to do to try and get on the summer tour and hopefully I can get capped.

‘It’s always been a dream to play for my country. It would mean so much. English rugby is in such a good place in terms of the depth and its quality. At Irish I can’t wait to see some of the guys progress through and maybe in the future we could have an all-academy or all-English XV.

‘That would be pretty cool. Our target is to win everything. It’s a really exciting time and I think the Premiership clubs are looking to play their younger players because they know the quality is there. We’ve seen that at Irish with Henry and Will. English rugby is going to be just fine in the future.’