Queensland, down 2-0 in the series after a couple of thumpings, came into the match under “unbelievable pressure” following poor results and question marks over the team’s culture after Jai Arrow’s COVID-19 breach.

Arrow was sent home from camp for inviting a female guest into the team hotel on the Gold Coast, breaking strict bubble protocols.

With his side down 12-8, Queensland hooker Ben Hunt scored two tries to help Queensland salvage some pride from a poor series.

Green, whose position has been questioned recently, refused to answer questions about his future but said the win proved the doubters wrong.

“Tonight was a great win for Queensland, it was a great win for this team,” he said. “We’ve been under unbelievable pressure and we left ourselves open to that by the way the first two games panned out. It is what it is but we showed some character to get the result tonight. 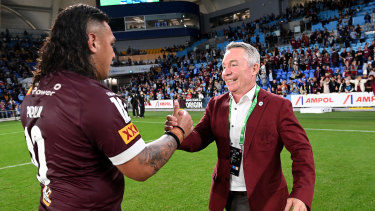 “Our culture was questioned and I think you don’t win Origin games if you don’t have character and you don’t stick together. You can talk about it all you like but it’s what you do out on the field that counts and I thought we showed that tonight.

“For me personally, I love Queensland, I love playing when I got the chance and I’ve enjoyed this series, as tough as it has been. Now is not the time to be making any decisions about [my future].

“I’m just going to go and enjoy the win … It’s better when you win.”

Maroons captain Daly Cherry-Evans said it was “not ideal” the team’s culture had been called into question before the match. 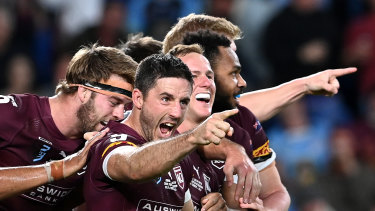 Ben Hunt was a star for Queensland as the Maroons avoided a clean sweep.Credit:Getty Images

“These things only happen when you open yourself up to it by losing footy games,” Cherry-Evans said. “The best thing we could have done is win. Now that we’ve done that, hopefully we can show that’s off the back of a lot of hard work and some pretty good culture.”

Spoiling a Blues clean sweep has given Cherry-Evans confidence the future is brighter at Queensland than some might think.

“We showed they’re very beatable,” he said. “I know they did a fantastic job the first two games – we’ve got to give them credit for that – but we showed tonight that we are a Queensland side that can take it to the Blues. They’ve won the series but that was a blueprint right there on how to play an Origin game.

“In the end we hung on and got a great Origin victory. We will definitely take what we can out of tonight, which is a lot of good things, and try and build on that for next year.”

Green said the ability to hold out a fast-finishing Blues side showed character.

“People talk about Origin efforts and sometimes they kind of don’t know what you’re talking about,” he said. “But our team lived through that, particularly for the last 10-minute period. We’ll take plenty out of that.

“Ben Hunt, playing at hooker for 80 minutes, he doesn’t normally do that. He was outstanding tonight. When we needed a play, Kalyn [Ponga] came up with it. He didn’t take an intercept but he stopped a try there. That was enormous for us.

“The future for Queensland is bright. We’ve just got to scrap away until some of those guys get a bit of experience under their belt.”