There is a satirical email doing the rounds among a group of former Wallabies that bemoans the decline in French acting standards following the Marika Koroibete-Anthony Jelonch incident.

Questioning Jelonch’s attendance levels at his school of dramatic art during the ‘teaching of action scenes – sword fighting, swinging through trees, pouting at coffee tables in French cafes and, most of all … convincingly being shot and playing dead’, the email is a biting commentary on the incident that led to Koroibete’s red card in Brisbane last Saturday.

But it is probably no less damning than the dry legalese of the judicial committee’s written decision from the Koroibete hearing, which states:

The written decisions on disciplinary hearings are always a treasure trove of information – far more useful than the bland press releases that normally precede them – and the Koroibete verdict makes it emphatically clear that, in the view of the three-person committee, Jelonch was acting.

On the one hand, there is a temptation to let this slide. After all, the Wallabies won the series, Koroibete and Jelonch have kissed and made up, the TV ratings were good and there is a Bledisloe Cup series to look forward to. Also, it is far from clear that Jelonch’s acting actually influenced the red-card decision, given that it seemed to be his reaction to knocking the ball on, rather than trying to get Koroibete sent off. So, move on, everyone. 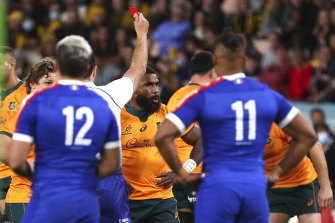 Marika Koroibete is sent off early in the deciding third Test against France at Suncorp Stadium on Saturday.Credit:AP

But we also need to get real. The Wallabies came close to losing a series in a manner that would have forever been associated with Jelonch’s acting. For the casual punters who tuned in to Nine for the Test – and the ratings suggest some had turned away from the code until Saturday – a French series win after Jelonch’s theatrics would have dead-set confirmed what they thought they knew about rugby: that rugby is now 10 per cent a collision sport and 90 per cent a debate about the latest additions to the rule book.

This is not being facetious: player welfare is of course an enormous issue but if I’ve learnt one thing about Australians is that they know how to spot a wrong’un. Michael Hooper knew it when he reminded referee that Ben O’Keeffe that Jelonch would of course need an HIA, and the Suncorp Stadium crowd knew it when they started to boo Jelonch when the replays showed him falling to the ground.

Australian rugby can’t afford to lose those punters, not when you’ve got lines like this in Rugby Australia’s 2020 report. “On 10 March 2021, World Rugby approved an additional loan to the Group for £2.5m, or approximately $4.5m. This loan will be interest bearing and will be due for repayment six months from issuance. Subsequent to year end, the Group has received a conditional offer for a financing facility of up to $40 million to ensure the long term financial viability of the Group through to the 2025 Lions tour and beyond.”

In the interests of fairness, Jelonch’s recollection of the incident should also be published. In his summary in the written decision, he is quoted as saying: “I received a kick-off when I take the ball, the Australian player, tackling me, touches my neck/face area with his shoulder, instantly it hurts a little, but the pain goes away quickly. I think that was unintentional, after this action and the HIA protocol, I was able to resume the game without problem. At the end of the match we shook hands and the player apologised.”

Let’s also be clear about one thing: Koroibete was not guilt-free in this episode, The written decision states that both Koroibete and Wallabies coach Dave Rennie “would not have been surprised” by a yellow card after the tackle. Koroibete likes to hit people in the chest/shoulder area, and if he keeps doing that he is absolutely walking a tightrope during the Bledisloe Cup series.

But Koroibete has been through his disciplinary process. He at least had to stand trial. Jelonch feigned a facial injury to con a ref, and the broader game, and no one said boo to him.

Never miss a medal or great sporting moment with our Olympic update emailed daily. Sign up for our Sport newsletter here.