The Melbourne Storm are desperate to not become the Golden State Warriors.

There’s a sentence I never expected to write.

Nevertheless, the NBA powerhouse are firmly in the Storm’s mind as they chase history, minor premierships, back-to-back titles and whatever else they can jam into their groaning trophy cabinet.

Brandon Smith let it slip during an interview with Channel Nine last Thursday night as the Storm beat the Titans, a result that saw them equal the record of Jack Gibson’s 1975 Roosters side for most consecutive victories.

“We haven’t wanted to focus on the record too much,” Smith, who was being rested, said. “They used the analogy that we don’t want to be the Golden State Warriors and chase the record and not chase the grand final. The end goal is to win the grand final, that’s what we’re more worried about instead of going out and breaking records.”

During the 2015-16 season, the Warriors broke a staggering 25 records, including the best regular season record in history with 73 wins, nine losses, surpassing the 72-10 win-loss record set by the Michael Jordan-inspired Chicago Bulls in 1995-96. 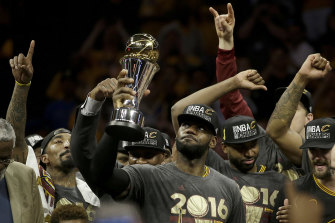 LeBron James turned in a series of performances that will be talked about for generations to deny the record-breaking Warriors the biggest prize of all.Credit:AP

Featuring players like Steph Curry, Klay Thompson, Draymond Green and Australia’s Andrew Bogut, back-to-back championships seemed inevitable, especially so when they took a 3-1 lead in the finals against Cleveland Cavaliers.

Then fate and an even stronger presence — LeBron James — turned the series on its ear. The Warriors lost game seven and in doing so set another record, becoming the first to blow a 3-1 lead to lose a finals series.

The man who has been reminding the Storm about how Golden State’s season soured is Lachlan Penfold, who was the Warriors’ head of physical performance and sports medicine during that season. He joined the Storm the following year as their head of performance.

“The lesson from the Warriors for the Storm is to not lose sight of the end goal,” Penfold said. “That was a great team that played ‘beautiful basketball’. They were a joy to watch. They had some real some superstars, Steph and Klay in particular, but they were selfless players. 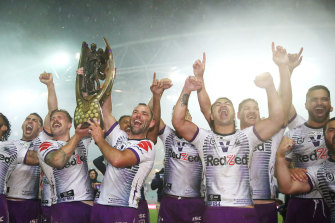 “There are parallels with this team. We’re playing some great, entertaining football, which is a joy to watch. The record is another one. The lesson that was learned over there was to keep the main thing the main thing. You are there to win a premiership, or in the case of the NBA the championship, and that’s what we need to make sure we do.”

Penfold said Golden State coach Steve Kerr opted against resting players as the team chased down the Bulls’ record, which Kerr had played a role in as a player.

“There was a strong push from certain players to go after the record,” Penfold said. “There were others who really didn’t care. They left it to the players to decide. I spoke to Steve at certain times about resting players, but there was always this little thing in the back of their minds about a chance to make history. Everyone makes their choices and they decided in the end they wanted to go for it.”

Melbourne sits on 19 straight wins. Victory over Parramatta on Saturday night at Suncorp Stadium will see them edge ahead of the Roosters side from 1975.

“The players I’ve spoken are cognisant of history. But they know they’re here for one job — and that’s the grand final.”

They’ve named an almost full-strength side, something they haven’t been able to do for much of this year because of injury, Origin commitments and in more recent times the resting of players.

“The players I’ve spoken are cognisant of history and understand it’s a tremendous achievement,” Penfold said. “But they know they’re here for one job — and that’s the grand final.”

Asked if any of the Golden State players reminded him of Brandon Smith, Penfold simply laughed and said none did.

There’s only one Hectic Cheese.

Annesley staying put … with work to do

NRL head of football Graham Annesley has denied growing speculation he’s about to leave the job, going so far to clear the air with chief executive Andrew Abdo.

Annesley has been linked to jobs with the 2032 Brisbane Olympics and Gold Coast City Council but assured this column he has no intention of moving on.

If that’s the case, he and the game’s powerbrokers have some serious issues to address in the off-season.

The game is being strangled by rules, edicts and crackdowns, all of which have left the fan disillusioned with what they are watching. 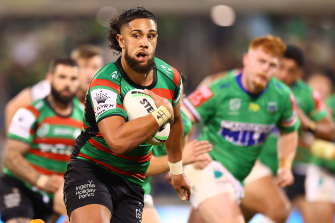 The suspension of Keaon Koloamatangi is just the latest in a long line of officiating mishaps this season.Credit:Getty

The overbearing influence of The Bunker, the confusion around set restarts and the heavy-handedness of the Match Review Committee needs to be addressed.

There can be no greater example of the madness that’s going on than the two-match suspension of Souths back-rower Keaon Koloamatangi for a crusher tackle that wasn’t a crusher.

Souths would have contested the charge at the judiciary but were intending to give the livewire forward a freshen up before the finals anyway, so they didn’t bother.

Koloamatangi was penalised while tackling Penrith winger Brett Naden, who turned his back and fell on his backside, looking for a quick play-the-ball.

It’s becoming a cliché what followed: Naden grabbed his neck, Stephen Crichton at dummy half howled in protest to referee Grant Atkins, and a penalty was given.

With the greatest of respect to whomever wrote this, what a load of gibber.

Koloamatangi didn’t apply forceful pressure at any stage. His chest ended up on the back of Naden’s neck because Naden twisted in the tackle then fell to the ground.

We’re all for banning dangerous tackles and practices.

But the NRL needs to stop conjuring reasons to prevent its players from playing.

Head office has lost sight of the fact players are the reasons people watch the game.

“I’d had a few too many drinks, as you do from time to time. Look, all we did was have a kiss in the bathroom.” — NRLW player Millie Boyle on her shenanigans with Bulldogs forward Adam Elliott. Some say love is a battlefield. For footballers, for whatever reason, love is often found in a toilet cubicle.

THUMBS UP
Australian 400m runner Steve Solomon took time out last week to give staff at Kings Cross charity Wayside Chapel a pep talk in these very confronting COVID times, talking about his journey from finalist in London, to missing out on Rio, to having the Tokyo Olympics delayed then running a personal best earlier this month. 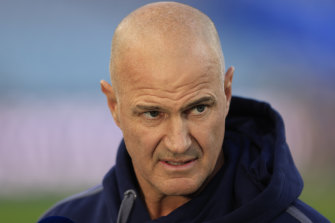 THUMBS DOWN
People in rugby league must stop using the term “moving forward”. In the last week, I’ve heard Brad Arthur, Anthony Griffin and even the Tigers Thomas Mikaele use it. Braith Anasta, who I love, said it four times in 43 minutes on Fox Sports. It’s a silly corporate/political phrase that doesn’t mean anything and it is DOING MY HEAD IN.

IT’S A BIG WEEKEND FOR..
Lance Franklin, who turns out for the Swans in their elimination final against GWS Giants in front of a full house at UTAS Stadium in Launceston. He needs eight goals to reach 1000 for his career, moving forward.

IT’S AN EVEN BIGGER WEEKEND FOR..
The Steelers, Australia’s wheelchair rugby team looking for a third consecutive Paralympic gold medal in Tokyo. They suffered a loss in their opening match against Denmark but can still make the final on Sunday. Get around them, sports fans, moving forward.