When Richmond called out the name of Tom Brown on Wednesday evening, at pick No.17 in the national draft, the Tigers were symbolically taking a player who might have been the property of the Cats.

Brown’s father Paul played 84 games for Geelong in the 1990s, including the losing grand finals of 1994-95 – a tantalising 16 games short of the necessary 100 for the defender to qualify as yet another Geelong father-son. 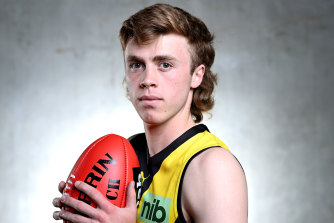 Another small sting for Geelong people was that Richmond had drafted Brown with what had started as Geelong’s first-round draft pick, the clubs having exchanged first rounders, present and future, in 2020.

So, the Tigers were stealing, not simply a son of Geelong, but a march on the Cats, who did not participate in Wednesday night’s first round of the draft, when Richmond had pick nine (Josh Gibcus) and then Brown, in what was the Tigers’ first major investment in the top-end of the draft for more than a decade.

Richmond and Geelong will enter 2022 attempting what the AFL’s draft and salary cap regime is designed to prevent: to contend for the premiership while simultaneously replenishing playing lists that are reliant upon veteran superstars.

Both clubs believe they’re capable of contending for the flag next year, but neither wants to reach for the grail before collapsing into long-term recession – the fate of Hawthorn since 2016.

When we compare teams, they’re usually measured in the present and short-term.

On the 2022 score, it’s unclear whether Richmond or the Cats are better placed. Mature Geelong won many more games in 2021, flogged the Tigers twice and have the potential upside of Tom Stewart’s return and more games from Patrick Dangerfield, Mitch Duncan and Jeremy Cameron.

But, as Joel Selwood and Tom Hawkins enter their 16th seasons, Geelong’s premiership window appears to be closing fast, after a remarkable prolonged period of contention that has yielded one grand final from six top four finishes and zero flags since 2012. Certainly, that’s the view of many within rival clubs.

Richmond, who fell out of the finals following a treble of flags in four seasons, are having a major renovation of both their playing list and game style.

The Tigers’ path forward, as with their former fast and furious game plan, is clear. They will prioritise youth, while not giving up on the present just yet – a position illustrated by five picks inside 30 and the signing of Robbie Tarrant, a 32-year-old key defender, from North Melbourne, from the same vintage as club cornerstones Trent Cotchin, Jack Riewoldt and Shane Edwards. 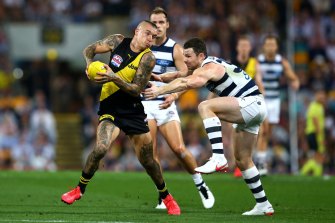 “The hardest thing for a football club is to make decisions for today and tomorrow, and we’re trying to do that,” said Neil Balme, Richmond’s veteran ex-football boss and now football department consultant.

Balme says the Tigers are seeking to avoid short-term overreach, whereby “all of a sudden in two to three years time, you’ve got to start again”.

Balme’s old club Geelong are in a similar position, but the Cats are starting from a weaker platform, having fewer capable players in the crucial mid-career demographic, and had less draft capital.

In another parallel development, both clubs lost young players (Callum Coleman-Jones, Mabior Chol for Richmond, Jordan Clark for Geelong) who sought better opportunities at lower-placed clubs and gained draft picks in the second round.

In comparing the clubs, I consulted a number of list management and football operations officials, past and present, from different clubs. The prevailing view was that Richmond were clearly in front of the Cats, who had difficult choices ahead, but could turn it around with few stellar picks or trades.

“Richmond in front, way in front,” said Matt Rendell, the ex-Adelaide and Collingwood recruiter, who felt the key difference was that the Tigers had several players “right in the wheelhouse, 24 or 25 [years old]” who were “very good”: Shai Bolton, Noah Balta, Jayden Short, Liam Baker, Jack Graham and Daniel Rioli, whereas the Cats were skewed older.

Geelong’s perennially poor draft position – only one top 10 pick (Nakia Cockatoo-Collins, 2014) – since 2007, has forced the Cats to utilise trades, free agency and mature state league players, in what marked a 180-degree shift from the draft-first philosophy that delivered the 2007-2011 super team.

Richmond benefited from dipping down the ladder in 2016 (acquiring Dion Prestia for one first round) and this year, and, of course, landed a footballer for the ages in Dustin Martin at pick No.3 in 2009 when the Cats were at their absolute zenith, a team that by the club’s admission, was many goals better than the 2021 team that Richmond overran in the truncated Gabba grand final.

Indeed, Chris Scott’s numerous critics – who focus heavily on their risk-averse ball movement – don’t seem to take account of the Cats’ relative lack of quality and leg speed in defence, where Stewart is the sole A-grader, and they are suspect for ground balls; how would those defenders fare if the ball flew in and hit the deck without numbers in support?

The Cats’ most successful mature recruits, Dangerfield aside, were actually draft picks: Stewart from the VFL, Sam Menegola and Tim Kelly from the WAFL, the latter delivering three first-round draft picks in a trade with West Coast, after two homesick years at Geelong. Mark Blicavs was an inspired recruitment of a category B rookie from another sport (athletics).

One long-time veteran of AFL clubland did a full assessment of Geelong’s trades and free agents selections since the 2011 flag – a period that covers all free agency history and has been marked by a unique record of constant contention and near misses.

The observer, a hard marker, gave each player recruited from another club either a tick (success), a cross (fail), or a question mark.

The remaining dozen players recruited from other clubs – Mitch Clark, Gary Rohan, Rhys Stanley, Zac Smith, Josh Jenkins, Aaron Black, Nathan Kreuger, Jack Steven, Lachie Henderson and Shaun Higgins (all trades), Luke Dahlhaus and Sam Blease (free agents) were given a cross. The harshest call of those 12 marked as fails is Henderson, but who did cost the Cats a first rounder (2016).

The overall score from 21 players, thus, was three ticks, six question marks and 12 crosses, an assessment that, if hard, still reflects the reality that the Cats have fared better in mature draftees, such as Stewart, than in trading/free agency – Dangerfield and Cameron the notable exceptions.

Over that period, Richmond have recruited just 11 players from other clubs. Under the same rating system, I awarded four ticks – Tom Lynch, Prestia, Toby Nankervis and Caddy. To give Troy Chaplin (question mark) a thumbs up wouldn’t be consistent with the Henderson verdict. Jacob Townsend is a question mark, except that he did play in the 2017 premiership. Anthony Miles is a query, too, while Chris Knights, Shaun Hampson, Taylor Hunt and the ill-fated Chris Yarran trade were marked as crosses.

Richmond’s three premierships have meant that the Tigers are playing with house money and can take risks, as they did on Thursday night when drafting Tyler Sonsie, a high-end talent whose injuries and questionable attitude saw him fall to pick 28, before punting on the talented Judson Clarke, who’s had an ACL.

Geelong, meanwhile, went local in the draft, selecting three Geelong Falcons at picks 24, 25 and 64 out of five choices, including the capable young ruckman (Toby Conway), that they’ve long lacked.

But arguably the single greatest difference between these clubs’ lists is that whereas the Tigers gained free agent Lynch at no draft cost – blessed that the Suns were second bottom and the compensation pick was No.3 – the Cats were forced to sell the farm when GWS matched the hefty offer for free agent Cameron. They were asset-stripped by the Giants, who plundered all three first-rounders the Cats owned, essentially negating gains from the Kelly trade.

Now led by new CEO and ex-football boss Steve Hocking, who will chart a different course to his predecessor Brian Cook, the Cats are well aware that their defiance of the system’s natural gravity will eventually end.

But if a stint of two-to-four years out of finals would provide better access to draft talent – and respite from the siege of unrelenting expectation – they aren’t going to engineer it, any more than Richmond planned to finish 11th this year.