It’s hard to get into trouble these days for saying too little. As we drown in a flood tide of words, usually it is more words that create more strife. They don’t have to be new words. Old words can age as potently as old wine. Whether it is Israel Folau thinking he is quoting from a vintage text or adult English cricketers caught out in the space of 280 characters tapped out by their teenaged thumbs, words lose none of their particular tang with time.

By declining the AFL’s offer of induction into its Hall of Fame, Adam Goodes was making an eloquent statement for the power of silence. No more words. Goodes did not come out and make a speech about why he declined. He strenuously attempted to blur the timing of his refusal so that it would not be over-interpreted or linked to any other coincidental event. He tried to avoid publicising it. Intimations of his motives have been conveyed by third parties. He simply decided not to speak. 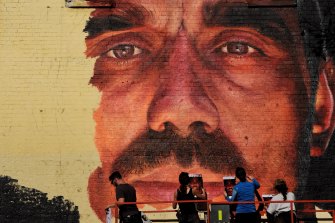 Adam Goodes has not spoken about his decision to turn down entry into the AFL Hall of Fame.Credit:Kate Geraghty

When everyone has their own platform, the freedom to speak is quickly mistaken for an inalienable right, as if being blocked on Twitter is the same thing as being denied a fair trial under the law. As a result, ‘self-censorship’ is seen as a violation of a human right and a victory for the bullies and trolls.

But another way of seeing self-censorship is as a victory for pacifism, for the act of bringing the fighting to a halt. I see Goodes’s self-censorship as a beautiful and noble conscientious objection. He can’t stop the endless argument between two camps, but he can take an action that stops the poison from flowing through his person. His silence is a sacrifice of sorts, but it is also, in its negation, a positive response to verbal violence. He will not contribute any words that give energy to spite. He is absorbing the blows and stopping them where he stands.

Still, many will not accept his silence for what it is: silence. He is accused of being a ‘sook’ about the treatment he received in his last years as an AFL player. He is asked to ‘get over it’ and ‘put it behind him’.

But what if that is precisely what he has done? What if silence is how he gets over it and puts it behind him? What if his retreat from speech is itself an expression of his freedom? What if he doesn’t trust what passes for debate today, and fears that whatever he says will be misunderstood, misconstrued, mistaken, misused? And if that is what he thinks, who could blame him? 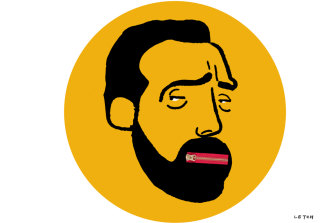 Nature abhors a vacuum and so, it appears, do people. Or some people. During a minute’s silence to respect a tragic event, how many of us actually think about that event, and how many are itching for the action to start? Goodes is merely offering a long silence that may last until more of us start thinking.

It’s worth remembering that by not speaking about his actions, by not joining the party on social media, by not entering the commentary booth, by not writing books nor speaking on radio nor starting his own podcast, Adam Goodes is doing the same as the overwhelming majority of the population. Most people are sane enough not to jump into a sewer. Goodes has a platform, or he could if he wanted it, but he has chosen not to use it. Is that not beautiful? Is that not a necessary corrective to the swamp of too many words?

Most valuably, Goodes’s silence has held up a mirror. Like the pond into which Narcissus fell, his absence from this debate has created a perfectly still and reflective surface. By their responses, every speaker can see themselves, in some rare cases for what they are.

I understand the illogic and hypocrisy of using a slab of words to praise the goldenness of silence. I understand the lack of sense in explaining my admiration for someone for his choice not to explain. I feel embarrassed and apologetic for speculating on someone else’s reasons for not speaking. So I’ll go away now. Too many words.