Menacing Maroons prop Christian Welch is back to terrorise Nathan Cleary, just as he did in last year’s grand final and the Origin I and Origin III triumphs last year.

The Queensland prop lasted just 12 minutes in game one when knocked out by Blues winger Brian To’o as Cleary went on to produce a Townsville masterclass. 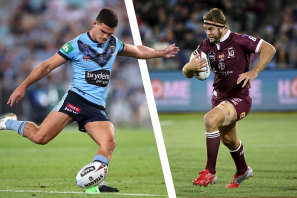 “The stuff I can do, the real effort plays like pressuring halves, that’s what I bring to Melbourne and what I will be trying to bring to Suncorp Stadium on Sunday night.”

Welch is a student of the game and studied Penrith last year, particularly Cleary.

The Panthers playmaker knows a fit Welch has put a target on his bruised and stitched-up face and said on Tuesday: “I expect no different. He’s obviously their key pressure man so I don’t expect anything different from him. He’ll be coming at me.”

Welch said: “If you look at NSW’s star-studded backline, the more time you can take away from Cleary and make him play earlier, the better opportunity our defensive line has in making a stop and making good defensive decisions.

“I’m pretty consistent with kick-pressuring most halves. I have a real awareness of how damaging Cleary’s kicking game is. I watched all last year how Penrith rolled downfield and then he’d bomb to the corner and they’d get up and bash you. It was relentless. They’d grind you down until you came up with an error.

“Trying to avoid that situation happening in game two is really important for us having a good performance as a Queensland team.

“Nathan is a good man-manager, his kicking game and calmness, he’s a real threat. He’s a nice foil for some of the weapons they have in the back line.”

Welch said the crackdown on high contact was not an issue for players like him trying to race up on kickers. It only became an issue, he said, when playmakers took the ball into the defensive line and turned late to pass.

Cleary and Latrell Mitchell took turns at launching field-goals from 50m out with a strong tailwind at Kingscliff on Tuesday, including an impressive right-footed effort by the latter.

Coach Brad Fittler has immense respect for premiership-winner Welch and returning enforcer Josh Papalii and said: “They were the front-rowers last year and they did an incredible job. Their side has definitely improved.”