For all the talk about Parramatta’s juniors’ system, Will Penisini is the local product Brad Arthur sees the Eels building a future around after purposely leaving the under-age hot shot cooling his heels in SG Ball.

Penisini’s rugby union roots have been well-documented given his friendship with Roosters wunderkind Joseph Suaali’i and the NSW Waratahs’ pursuit of both while they were at The Kings School, a GPS rugby stronghold.

But Penisini has also been on an Eels development deal since he was 14. He played his junior league alongside Jake Arthur, Sean Russell and Sam Loizou in a Rouse Hill Rhinos team coached by Arthur snr.

And after he played in all 25 games of the Eels’ run to Friday’s grand final qualifier against North Queensland, the coach sees 20-year-old Penisini as the pin-up for what Parramatta should be producing in their own backyard. After giving the Tongan centre “a kick in the arse” along the way.

“Will’s certainly someone the club wants to build around,” Arthur tells The Herald.

“That conversation’s been had with his management and the club’s definitely keen to keep him.

“He’s humble, from a great family and he’s a hard-working kid. That was something I’ve challenged him on in the past.

“I remember giving him a fair rocket and a kick in the arse back in the under-20s. I left him in the SG Ball for a bit longer than planned because he needed to commit more to his training.

“So I challenged him again once he came into NRL pre-season training about how important that work is.

“Will gets it. He didn’t take that spray personally and he can handle the truth because he’s honest with himself. He’s put that work in and his best footy is still miles away. He’s got years ahead of him.”

Penisini is off-contract as of November 1 and while he won’t close the door on rugby, he sees himself in blue and gold for some time yet. 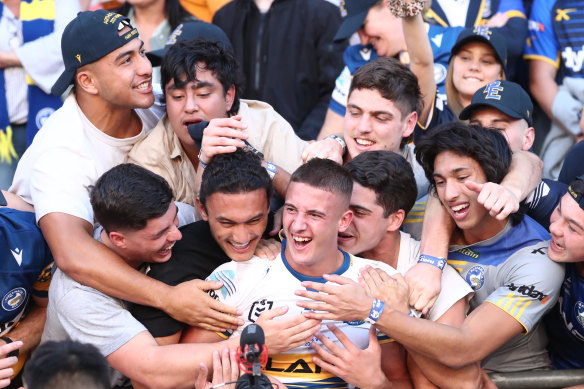 He credits Loizou with introducing him to a 13-man game that will take him first to Townsville, then potentially a grand final and an expected Tongan World Cup trip at season’s end.

“My mum put me into soccer to start with because she didn’t want me playing contact sport,” Penisini says. “Sammy gets the credit for getting me into my first game of footy. I hated soccer, too, so I’m pretty grateful to him.

“I’ve been a Parra fan the whole way. I grew up in the system, lived locally and I’m five minutes away now, I should be walking to training. It’s pretty surreal to be playing for the club I’ve looked up to and the players I’ve looked up to my whole life. 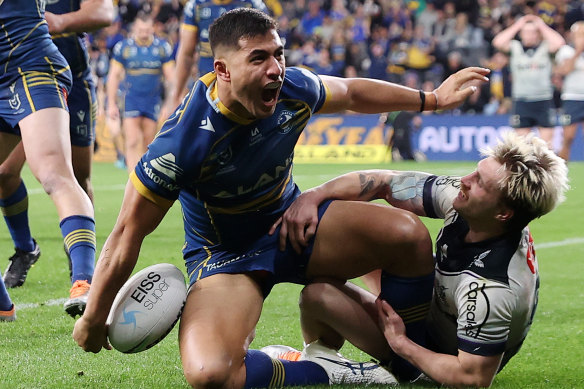 Will Penisini has been a fixture on Parramatta’s right-edge in just his second year of NRL.Credit:Getty

“I’d love to be here for a long time. I already have been a part of this club for a fair while and it just keeps getting better.”

Having watched Penisini grow up alongside his son Jake and into a promising NRL career, Arthur’s message to the pair earlier this week had nothing to do with the Townsville furnace that awaits on Friday.

“I said to Will and Jake the other day, ‘I hope in five years’ time that I’m still watching you as the last ones off the field and I’m still struggling to get you off the field’.

“They’re always out there playing kick and chase games, just loving their footy. I hope they don’t lose that.”