Home » Rugby » Who is Jack Ginnivan? We delved into his TikTok (and beyond) to find out 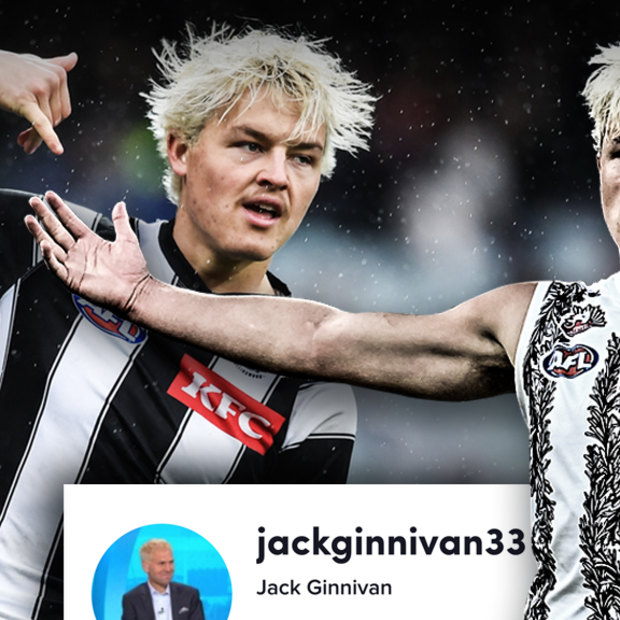 Jack Ginnivan is a new-age footballer, of the Tiktok generation.Credit:Getty Images

Here are five things you will see when you check out Jack Ginnivan’s TikTok profile:

If you believe the “lemons”, Collingwood forward Jack Ginnivan is the most polarising player in the AFL. He wears the most eye-watering peroxide job since Jason Akermanis. He chirps at opponents and shushes their fans. Early on, he drew so many free kicks the AFL clarified its rules around head-high contact. Now he can’t buy one. His shorts are a size too big. 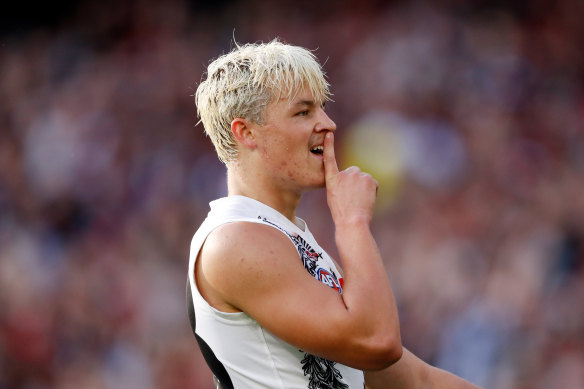 This week, Geelong’s Patrick Dangerfield – the president of the AFL Players Association board, with 301 games, a Brownlow Medal and eight All-Australian awards to his name – took the highly unusual step of breaking the unofficial players’ code of silence after Ginnivan pinned him in what he alleged was a chicken-wing tackle in the qualifying final, an incident missed by the match review officer.

Dangerfield, apparently, was furious. Perhaps he was also motivated by both Collingwood and Geelong still competing in the finals; the two clubs may yet meet again. “You’ve got a responsibility to treat players with care,” Dangerfield said. “If he had his time again, I’d like to think he’d do something different.” Hawthorn legend Dermott Brereton also weighed in.

What did Ginnivan do to get all this attention?

Some players are born into the spotlight. Nick Daicos, for example, has grown up in it by virtue of pedigree and precocious talent. Ginnivan was thrust into it, thanks to an explosive second year, his own antics and a sporting media that quickly identifies and distrusts anyone cut from a different cloth. He came to Collingwood without fanfare, via the 2020 rookie draft.

Ahead of a do-or-die final against Fremantle, the Magpies have wrapped their lightning rod in cotton wool. After their win over Port Adelaide in round 20, the young man admitted the level of attention on him was taking a toll on his mental health. Collingwood coach Craig McRae has become short with reporters in response to questions about him.

But back in round one – after the Magpies stunned St Kilda with a first-up win – it was the club’s own social media team that let Ginnivan loose with a GoPro. He predicted (accurately, as it turned out) that it would be the first of many Collingwood wins for the year. Cornes suggested that he needed to “earn some respect before carrying on like that”.

Four weeks later, Ginnivan was an Anzac Day medallist after kicking five straight against Essendon, the last of them in the final quarter from a tough angle with only a point separating the sides.

Now, Cornes can only dip his lid. “He’s had some big moments and kicked some clutch goals at crucial times,” he says. “He’s been a real weapon for them.”

What makes him so good?

Ginnivan is not a high possession winner. He plays in the footballer’s graveyard otherwise known as the forward pocket. He is very, very good at it. “If you had said to Collingwood at the start of the year that they’d get 36 goals out of a kid that no one had heard of, they would have been pinching themselves,” Cornes continues.

Ginnivan doesn’t have classic athletic attributes. He is not quick, nor is he particularly strong overhead. But he is a beautiful kick, has a big-game temperament and is smart. Three weeks ago, against Carlton, as the ball looped over his head, Ginnivan saw it was destined for Jamie Elliott, waited, then blocked opponent Adam Saad’s run. It was the winning play.

And while he enjoys baiting opponents, the picture painted of Ginnivan to The Age by his teachers, former coaches and teammates is far from disrespectful. Instead, they speak of a kind, almost deferential kid from Castlemaine who is grateful for his opportunities and has worked hard for all of them. What’s not to love?

“What we see on the field and what he’s been portrayed as is completely different to the experiences that I’ve had with him, personally,” says former Collingwood premiership player Leigh Brown, who first encountered Ginnivan as a coaching director at Vic Country. “He was probably a little bit shyer then, trying to work out where he fitted with everyone else.” 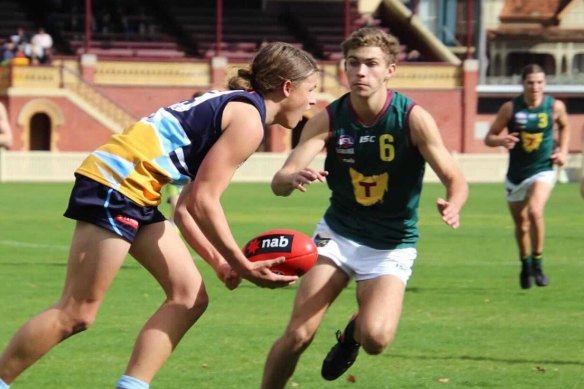 Ginnivan dishes off a handball for Bendigo in his draft year, 2020.

Bendigo Pioneers coach Danny O’Bree tutored Ginnivan at Bendigo South East College. “He’s always given back,” O’Bree says. “He’s turned up and been part of our training sessions at the Pioneers. I took my kids down to the Collingwood v Port game and there were hundreds craving his attention, but he still made sure he gave my family some time.”

The soft side of Ginnivan is evident in his TikTok clips. He is a seemingly compulsive hugger. “He’s such a loving and affectionate sort of kid,” O’Bree says. “Really close with his family; he gets back as often as he can and he celebrates all his family stuff. He’s never forgotten where his bread’s buttered.” 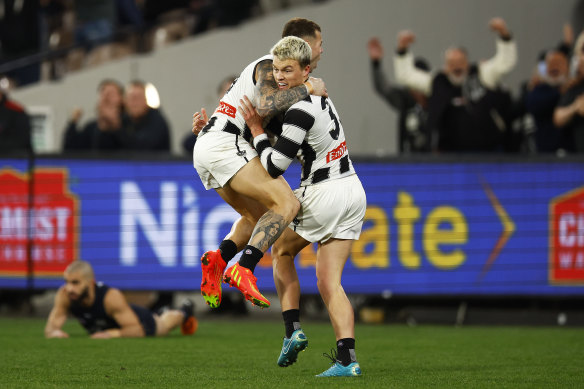 Ginnivan is a compulsive hugger.Credit:Getty Images

Now even Kane Cornes is a fan. What changed?

Cornes says Ginnivan represents “almost the face of the new-age footballer”, emblematic of the TikTok generation. His clips rack up hundreds of thousands of views each.

“Clearly he’s quite a captivating individual and personality that is going to be well received by brands and endorsements,” Cornes says, with the proviso that he continues to excel on field.

He enjoys the irony that it’s his face on Ginnivan’s profile picture. “I like that about his nature. It’s not easy to take criticism as a young player, and certainly the first time you do cop a good dose of criticism from the media it is quite confronting, you feel like the world is against you. But he hasn’t done that; he’s been able to have a laugh at himself.”

Not all of Ginnivan’s TikTok is rainbows and unicorns, though. During Collingwood’s mid-season bye, when Jordan De Goey’s ill-fated trip to Bali blew up, Ginnivan and teammate Isaac Quaynor were made to take down a clip where the pair were shown rating women by appearances. It was – to put it kindly – 19-year-old stuff.

What’s Ginnivan’s background, and what was his path to the AFL?

“He had a few different haircuts,” former Bendigo Pioneers coach Rick Coburn says. “He was a real character, someone that the boys loved to take the mickey out of, but very liked by the group. He was very jovial, and a very hard trainer – always the last on the track, usually practising his goalkicking – but he didn’t take himself too seriously.”

Ginnivan, of course, took the mickey right back. At everyone. “I think what’s polarising about him is that he does love to get under the opposition’s skin, and that includes the spectators,” Coburn says. “He’s pretty cheeky, there’s no doubt about that, he’s good on the banter side of the game, but I always enjoyed coaching kids with a bit of personality.” 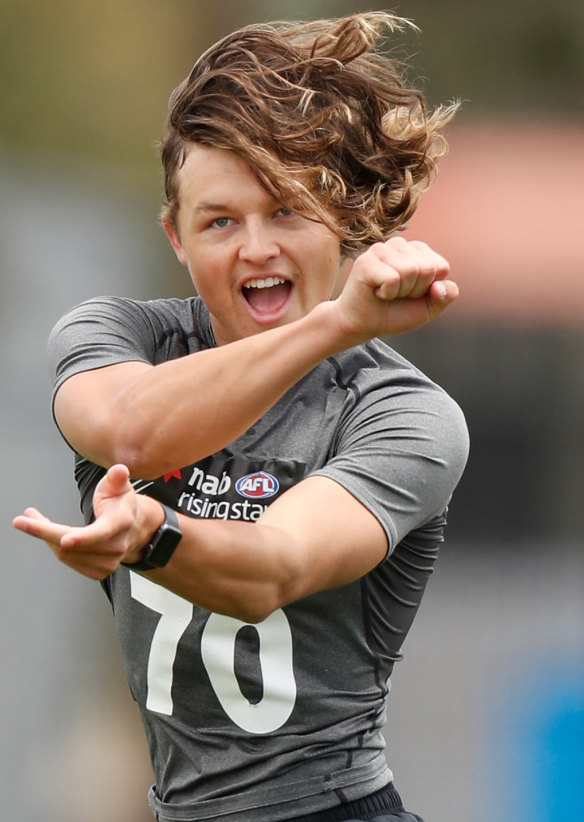 Ginnivan was pick 13 in the 2020 rookie draft.Credit:Getty Images

A runner for the Gold Coast Suns tells of dashing out to defence at Metricon Stadium in round 16. Ginnivan sized him up. “Ooooh! It’s the RUNNER, here to deliver a VERY IMPORTANT MESSAGE from Stuey Dew!” he said in a sing-song voice. The runner was so taken aback that he had no comeback. “I was like, yeah, I am actually. He’s got me there,” he says.

“I think a lot of people want to pick holes when they see something a bit different from the norm,” says Dean Sheldrick, another Pioneers coach who also taught Ginnivan at Bendigo South East. “He’s going to finish with probably a 40-goal season, he’ll have a couple of finals under his belt, and he’s done all that from a pathway outside the norm for an AFL player.”

Nick Daicos is already a slick media performer. Ginnivan is charismatic, but raw. He is not a product of the private school system, nor a scholarship recipient. Every day, he would travel the 40 kilometres from Castlemaine to Bendigo to get to school. “I don’t think people understand his full story as to where he’s come from,” Sheldrick says.

Ginnivan could easily have fallen through the cracks. Sheldrick says Bendigo South East tried to provide additional avenues for kids whose families may not have had the necessary resources, not only to help them through their VCE but also to support their sporting pursuits if they looked capable of making the grade at elite level.

His dreams were also interrupted by COVID-19, and he struggled when football was taken away. But, Sheldrick says, he remained engaged, and completed his studies. “From a teaching point of view, he always left the communication streams open, he always picked up the phone and always responded,” he says. O’Bree and Leigh Brown provided additional support.

It helped that Ginnivan was adored by his teammates. “They love him,” O’Bree says. “I was speaking to some of his previous Pioneers teammates that have been lucky to get on an AFL list, and they loved their time with Ginni. He’s such a buoyant and positive person when he’s around, he’s always got a smile on his face.”

Current teammates at Collingwood feel the same way. “He is just a normal kid,” says Taylor Adams, whom Ginnivan lived with when he first arrived at the club. “I remember a conversation at my place when he moved in and started reeling off stats from my career. I could tell he was a real footy nut.”

He doesn’t miss a Collingwood AFLW match, and was spotted during the pre-finals bye weekend watching his sister play netball in Castlemaine.

“The one thing that you probably don’t see is the relationships that he has been able to build within the footy club,” Adams says. “He’s loved by all his teammates, all the coaches.”

Adams adds that Ginnivan shadowed him in his first pre-season; by the end of it, Adams was the one doing the chasing.

“The one thing that you probably don’t see is the relationships that he has been able to build within the footy club. He’s loved by all his teammates, by all the coaches. He’s just a really nice kid who’s put his head down and got to work.”

What’s behind the cheeky goal celebrations?

Josh Daicos says Collingwood have been mindful of Ginnivan’s welfare amid the maelstrom, while embracing his points of difference. “We’re happy he continues to be himself and doesn’t let anyone else change the way he thinks he has to act. You don’t want everyone being robots, you want different personalities and that’s what makes the game special.”

Ginnivan enjoys a celebration. Against Fremantle in round 10, Ginnivan waltzed into an open goal, took a bounce and pumped his fist before roosting the ball into the second tier of Optus Stadium. Social media lit up with a mixture of love for the teenager’s unbridled joy and scorn for a young man literally getting ahead of himself.

Jack Ginnivan is having fun. Yes, he is a bit of a shit-stirrer. But there is no malice in him. “I don’t think he’s doing anything to be disrespectful, he’s just doing it because he’s celebrating doing something that he loves,” Danny O’Bree says. “That’s certainly what I tell kids in our program – just enjoy it and celebrate the little things.”

He is also, let’s not forget, very young. Just a guy trying to figure out what’s what, lemons.

With additional reporting by Peter Ryan and Marnie Vinall