Home » Rugby » ‘Which male side would you expect to do this?’: Arnell calls out AFL for fixture as Suns beat Cats

Brisbane Lions premiership player Lauren Arnell has called out the AFL for giving the Lions four games in 15 days in its condensed round-eight and nine fixture to catch up games postponed.

Arnell, tweeting before she worked as a boundary rider for Gold Coast’s win over Geelong on Friday night, said her former team was being asked to play a fixture the AFL would never give to its male players. 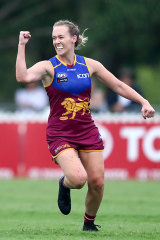 Arnell’s frustrations add to concerns around the league that the January start and catch-up games are having an impact on injury rates and the quality of the competition.

AFLW sides will complete a combined 16 matches over two rounds, with the GWS Giants, St Kilda, Western Bulldogs and Gold Coast joining the Lions in playing three matches each but those clubs are largely at home or have one away trip.

Those games will come after the Lions fly to Melbourne on Sunday to play St Kilda at Trevor Barker Beach Oval.

“One game is travel to Melbourne and the fourth game in 15 days is a flight to Perth,” Arnell, who retired last year, tweeted.

“Don’t try and tell me a male AFL team who are paid full-time would be expected to do this.

“What level of athlete and staff well-being are we reaching or even aiming for here?”

Gold Coast Suns are knocking on the door of the finals after an impressive home win over Geelong on Friday night. 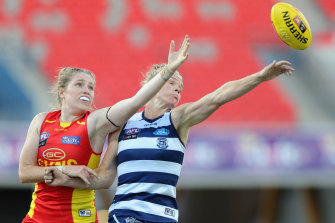 The Cats had a dream start as Kate Darby marked and kicked the first goal, followed by 18-year-old Zali Friswell who took a mark and converted for her first AFLW goal. Both goals were set up by star recruit Chloe Scheer.

Suns ruck Lauren Bella took a mark outside the forward 50 metres then received a 50-metre penalty for encroachment which put her within range and she was overjoyed to kick the goal as it was her first in 23 games.

The home side kept up its trademark tackle pressure, winning clearances through the likes of Alison Drennan (30 disposals) and getting the rewards as Tara Bohanna snapped a goal and the helmet-wearing Tori Groves-Little followed with a goal, tapping her helmet after battling back onto the field after issues with concussions. 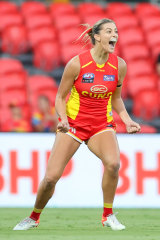 Lauren Bella celebrates a goal for the Suns.Credit:AFL Photos

The Suns took a 21-12 lead at half-time and extended it early in the third as Jamie Stanton ran into an open goal for a 29-12 lead.

But the Cats refused to give up as Phoebe McWilliams broke their goal drought, soccering through. It was soon matched by a second from Groves-Little, who ran into a bouncing ball and kicked an open goal, with their lead jumping to 42-18 going into the last term.

Scheer kicked two goals in the last term but it wasn’t enough.