Home » Rugby » ‘Whatever happens, happens’: Stratton’s focus on team, not himself

Not all teams reflect their leaders. Hawthorn do. Ben Stratton is emblematic of the Hawks right now.

The Hawthorn captain plays his 200th game this week. He is a decorated, warrior player who is tiring to the line. He embodies the best of their recent past and the fact that an era is closing. Hawthorn is entering the recession it had to have. 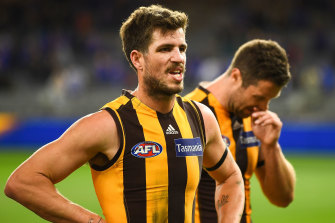 Ben Stratton and Hawthorn have endured a tough season.Credit:Getty Images

As he approaches the 200th game with undisguised pride he'd rather discuss the previous 199 than how many more may yet come. There are doubts he will play next year given his form and the state of the club but a decision on that will come later.

In part he'd rather not contemplate what that decision might be but in larger part he feels, as captain of a struggling team, that he doesn't want to make it about him. He is more concerned for what happens next for his team than himself. But then for a club entering a rebuild, where he sits within that is also relevant.

"Your guess is as good as mine how many games I have left. There's six games left this year and whatever happens after that happens," he said.

"I'm super proud of myself and everyone who has had a part in my career for the past 11 years or so.

"All the decisions I will have to make in the near future, you always think about wanting to leave the club in the best position possible on the field and with the culture. Hawthorn have a strong culture and you want the kids to come in and feel that culture and to pass it on to them. That's where we as leaders come in and build on that culture.

"We have a number of young leaders who could step up. I could not tell you who will step into the [captaincy] role when it happens. We are lucky enough to have a few who could do it."

When he was made captain, taking over from his close friend Jarryd Roughead, he was not an obvious choice in the way his predecessor was. Stratton is a relaxed and slightly unconventional football figure who is a leader-through-action type. Unfortunately this year he has found that difficult as his form has fallen away.

"I have learnt heaps as captain. I learnt you cannot do it all yourself – I have got strengths and weaknesses and I have to bring my strengths and bring others in for my weaknesses. There are other coaches, players, leaders that will pick up on some of my deficiencies

"You have to think about your own form. At the end of the day that's why you are paid to play the game but if you get caught up in your own head and how you are performing then you are not helping anyone.

"My form might not be up to scratch at the moment but you know there are other things you need to be doing as captain to lead the club."

The club has been criticised for being too hospitable this year, and too inhospitable last year when Stratton was done for pinching. He was captain when they were both too nice and not nice enough, and he thinks both points are nonsense.

Eleven years, 200 games, three flags, captain of the club. Respected player. It's a good return for a third-round draft pick.

"When you put it like that it sounds all right but I am more focused on trying to get the team playing the way we know we can," he said.

"I am so proud of the boys, they have been working their guts out, you cannot question the work they have put in. We just haven't been getting the results."

Stratton is thankful to football. It gave him a career, success, friends and now family. He met his fiancee Laura through football – she was Roughead's wife's best friend.

"We like to keep it close. We are the family club," he laughed.

Roughead wrote in his recent book his fondest story of Stratton. It was the day after the first of the premiership threepeat and the team was at Roughead's house. The players looked out and saw Stratton riding down the street on a bike wearing a wet suit. No reason.

"I'm glad he put that story in there," Stratton smiled.

"It must have just been a cold September day, I don't know. Some things don't require too much thought or explanation."