Home » Rugby » What the new AFL broadcast deal means for you, the clubs, the game

On paper, this looks like a stupendous deal for the AFL, the clubs and, in due course, the players.

The $4.5 billion over seven years from 2025 – which is a long way ahead of what the NRL receives from Foxtel and Nine – will allow the AFL to keep 18 clubs solvent, pay players – men and women – and to keep the game affordable for members.

The AFL can continue to fund Greater Western Sydney and Gold Coast at well above the other clubs, can keep the smaller Victorian clubs competitive with the monster teams, ensure that AFLW moves to full professionalism and spend more money on the game’s development in NSW and Queensland. 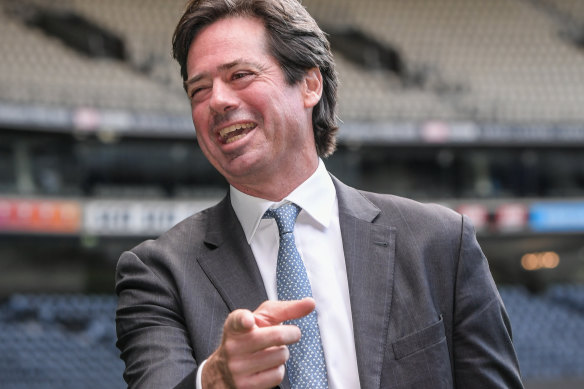 Gillon McLachlan’s last broadcast deal will have all manner of consequences, not only for Australian football but for cricket and conceivably tennis and the rugby codes. The AFL has entrenched its position as the country’s most powerful sporting code, in commercial terms; there will be fewer dollars for cricket, in all likelihood.

The case for a Tasmanian team will likely strengthen following this deal, since the majority of existing clubs won’t be as concerned about a 19th team draining the coffers.

So, where’s the hitch? Foxtel and Seven are not outlaying an additional $150m per year because they love footy, or in a fit of euphoria after the high-rating week one of the finals. While Channel Ten and its owner Paramount forced Foxtel and Seven’s hand by upping the ante with Ten’s 10-year $6 billion bid – which Ten insiders believe was only beaten on the buzzer by a late top-up by News Corp/Foxtel – the incumbents would only have paid this enormous premium in return for something.

The key to this deal is that Foxtel – which provides more than 60 per cent of that $4.5 billion – has gained better exclusive content that should drive subscriptions. We have to look at the weeds of this deal to understand how the game has shifted, slightly but inexorably, in the direction of a viewer-pays culture and outcome, despite the protestations of the AFL.

We have to look at the weeds of this deal to understand how the game has shifted, slightly but inexorably, in the direction of a viewer-pays culture and outcome, despite the protestations of the AFL.

Foxtel wanted a “Super Saturday” – a pay day, so to speak, that the broadcaster didn’t share with their free to air partner. And the AFL gave its most important partner what it craved, with two significant trade-offs: The Foxtel exclusive Saturday was for the first eight rounds only, and in return, Seven would own Thursday nights for the first 15 rounds.

For Foxtel and premier channel Fox Footy, it was worth far more to have a day to themselves than to continue with a confusing split of Thursday nights with Seven.

Further, the new deal – remember, only from 2025 onwards – gives the rusted-on fan of the Perth, Adelaide, Sydney and Queensland teams – a far greater reason to subscribe to Foxtel, or more likely, its streaming arm Kayo.

In the developing states of the north, the Swans, Lions, Suns and Giants will lose three live games on free to air each. And all three of those games will be in those first eight rounds of the season. The AFL media release – with a touch of deft leg spin – described this fine print thus: “Outside Victoria, the match involving the local team will be broadcast live into the local market on the Seven Network and 7+ digital except for selected matches on holdback (my emphasis).”

Privately, the AFL is talking about using the extra cash to help ramp up footy in the northern states. In truth, it’s a concession they’ve made to Foxtel, in the knowledge that the free to air ratings aren’t great in Sydney, in particular, anyway.

For fans of West Coast, Fremantle, Adelaide and Port Adelaide, they’ve retained the status quo for free to air games overall – eight each, with three on “holdback” (an AFL word for delayed), but with an important hitch: all 12 of those “holdback” games will be on Super Saturdays in the first eight rounds.

So, suddenly, the deployment of free and pay has given consumers a serious incentive to get Foxtel or Kayo in those states. Ditto for Victorians – the heartland and major driver of the game’s prosperity – inside those first eight weeks.

Ten/Paramount’s pitch wasn’t simply financial, by the way. The American-owned network (which has a streaming arm Paramount +) also offered to put footy on free to air, on the primary channel, every Saturday night, in Queensland and NSW; obviously, their pitch had to exceed the incumbents. Eventually, they were beaten on dollars.

Foxtel is the more crucial partner for the AFL commercially, even if the league needs that vast free audience for the biggest games, finals and the grand final. Fox Footy is an enormous asset for the AFL given the wall-to-wall programming and superior production values.