What happened NSW? What happened to the telepathic combination of Nathan Cleary, Jarome Luai and Isaah Yeo? To Cleary’s filthy, floating right-foot bombs in the westerly winds? To James Tedesco and Damien Cook trucking through the middle at will? To Payne Haas and Junior Paulo pummelling the Maroons into the middle of next week?

What happened NSW in that 16-10 loss to Queensland in the opening State of Origin at Accor Stadium on Wednesday night?

I’ll tell you what happened: they didn’t have Tom Trbojevic and Latrell Mitchell, their two best players from last year’s series.

They were also beaten by a Queensland side clearly regenerated by the coaching of Billy Slater and inspired by Cameron Munster who produced his greatest Origin performance, which is saying something.

Despite all of this, the Blues went agonisingly close to reeling in the dominant Queenslanders in.

When NSW backrower Cameron Murray crossed with eight minutes to go, with a crowd of more than 80,000 roaring in the stands, they were back in it. 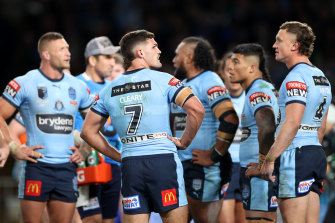 The Blues gather under the posts after conceding a try.Credit:Getty

When Yeo was tackled just centimetres short of the tryline, and time expired with Maroons defenders lying all over him, the match was over.

The Blues now head to Perth’s Optus Stadium on Sunday, June 26, where victory can keep the series alive, just as it did in 2019 after they lost the opening match in Brisbane before triumphing in Sydney in the decider.

NSW coach Brad Fittler turned various shades of grey in the coaching box as his players were flustered by Queensland’s scrambling, annoying defence.

The hard truth is Queensland is infinitely better than the Blues.

Their two second-half tries — first to Cherry-Evans then Valentine Holmes — secured the win but, in reality, they could’ve scored more.

As for Munster, he might be staying away from nightclubs these days but in the second half danced around Blues defenders at will.

With six minutes to go, he ripped the ball out of Stephen Crichton’s hands with the Blues pressing the Maroons line; a signature play from a player who thinks two moves ahead. 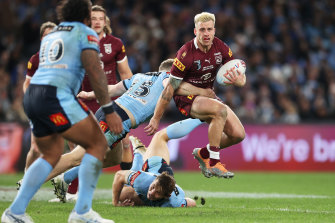 Cameron Munster lead the Maroons to victory and was named man of the match.Credit:Getty

Queensland also managed to hold their nerve when the Blues threatened to run them off their feet in the first 20 minutes.

Of all the famous lines Jack Gibson dropped in State of Origin commentary during the 1980s, the most famous related to NSW winger Andrew Ettingshausen: “That guy is so quick, he can switch off the light and get into bed before the room is dark.”

If Big Jack was still alive, you suspect he might say the same of Origin itself given the warp speed at which games are being played these days.

Sooner or later, we’re going to blink and the game will be over.

The first half felt like a game of touch footy after swirling westerly winds dried out the normally dewy surface at Accor Stadium.

NSW tried to ambush Queensland through the middle of the field with their outside backs carting it up more than their forwards. Time and again, Tedesco, To’o, Wighton and Tupou, punched away through the middle, and it eventually created the space out wide they were seeking with Wighton scoring out wide.

For the rest of the half, though, Queensland had better field position and possession and should’ve really led by more than 6-4 at halftime.

There were the usual Origin theatrics. Referee Ashley Klein pulled up forward passes that were line balls. Queensland’s Patrick Carrigan came on and whacked Wighton, who responded a set later by whacking Lindsay Collins. Fabulous stuff.

NSW’s defenders — Wighton in particular — hammered Cobbo every time the ball came near him. Yet the Broncos youngster wasn’t overawed.

Late in the half, the ball shifted wide and bounced, allowing Cobbo to catch it with the defence ever-so-slightly rocking on their heels. He sprinted down the right touchline, dropped the ball on his right foot and gently grubber kicked it infield.

Cobbo had a broad Cherbourg smile on his face before centre Dane Gagai gobbled it up and scored the try.

Afterwards, Munster said it was “one of the hardest games I’ve ever played”. It was also one of the “fastest”.

Unless NSW can find a way to shut him down in Perth, this series will be over and NSW will be left asking: “What happened?”