Hester Brown, wife of Melbourne forward Ben, found herself in a similar situation to Joe Daniher’s partner Adelle Bougis when she was heavily pregnant and unsure if Ben would make the birth due to football.

Ben needed knee surgery in February 2021 to be ready to play in round one. Hester was 40 weeks pregnant, due to give birth to their second, child Esme.

Knowing she could go into labour at any time, Hester said it “was really stressful” thinking Ben might miss the birth because he’d be under anaesthetic.

“I felt like there was definitely a consultation process, but I guess I didn’t feel like I had a lot of power to say no to it, knowing that he needed to have as much time as possible to be able to get back in time for round one,” said Hester.

Ben ended up making the birth – by a day – as Hester was induced because of preeclampsia symptoms, although he was in the maternity ward on crutches and unable to walk.

“So that was a bit of an experience as well, particularly when, you know, things got a bit tricky in the labour and I couldn’t walk around the room and my support person also couldn’t walk,” said Hester, who laughed as she recalled the nurses providing Ben with ice for his knee intended for the mother’s perineum after the birth.

Understanding the stress of childbirth, Hester said it was great that Brisbane Lions star Daniher could witness the birth of his first child, a baby girl, and also support his partner, Adelle, through labour.

“I think also, we do forget to think about, not just the partner seeing the birth of their child, but also the partner that’s giving birth, and what a difficult process that is; how stressful it is, painful and how much support you need,” Hester said. 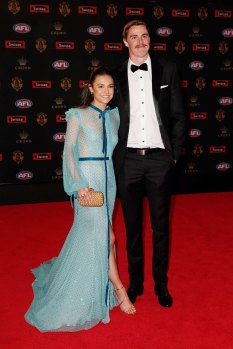 Joe Daniher and his partner Adelle Bougis at the Brownlow.Credit:Paul Jeffers

“So, I’m very happy for his partner that she got to have that support that I’m sure she needed.”

Daniher withdrew from the Lions’ team just hours before their semi-final against Melbourne on Friday, and had the full support of his club. A week earlier he had kicked the winning goal in a pulsating first final against Richmond. His decision came 22 years after former Brisbane spearhead Daniel Bradshaw made a similar decision, to miss the Lions’ 2000 semi against Carlton for the birth of his child.

Daniher’s side snatched a 13-point victory over Brown’s Demons without him, while Bradshaw’s Lions were walloped by 82 points. The response to their decisions shows how times have changed.

For the most part, the football community respected Daniher and Bougis’ decision, including coach Chris Fagan, who told Fox Footy before the match it was “the right call”.

“He told us to make sure … don’t have unprotected sex with your wives in January,” Bradshaw’s former teammate Brad Scott recalled on Fox Footy back in 2014.

“I said to Leigh, I think that’s a bit beyond your jurisdiction. I laughed and he didn’t.”

It’s much more common now for players in all sports to be granted personal leave for the birth of their children. In 2020, when teams were closeted in hubs and onset of the pandemic made travel more difficult, at least a dozen AFL players missed matches for compassionate reasons, including to be with their partners at childbirth.

Collingwood’s Steele Sidebottom was the most high-profile of them, while Melbourne City captain Scott Jamieson missed his club’s maiden A-League grand final to be with his partner Vicky for the birth of their son Cooper.

Hester said she’s glad the response to Daniher’s decision to miss the game and fly home was largely positive, and that it reflects how times have changed.

“I think there’s definitely a shift in how people are talking about it, and I think we’re sort of getting to the understanding that you can’t really begrudge someone for making their own decision, but also that people are all in different situations,” she said.

“I thought that it was really lovely that he felt like he could go home and was there for something that’s very difficult, very special and very personal, and I think we should be very careful to make sure that everybody feels like they can make their own personal decision in that situation.”