The Queensland Rugby League has pledged it "won't take any risks at all" with star five-eighth Cameron Munster, who has made a significant stride in his recovery from concussion before the series decider in Brisbane.

Munster, who took a heavy knock in just the second minute of NSW’s 34-10 thrashing of the Maroons on Wednesday night, will undergo the NRL's mandatory concussion protocols. 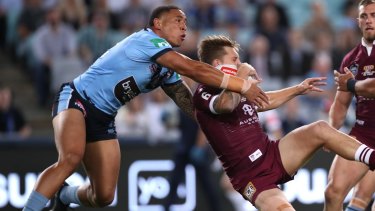 Cameron Munster is taken down by Tyson Frizell before his concussion.Credit:Getty

Munster was unsteady on his feet after a mid-air collision with Tyson Frizell as he fielded a Nathan Cleary kick. Queensland team doctor Matt Hislop confirmed Munster later passed his head injury assessment in the ANZ Stadium sheds.

He will be restricted in the amount of contact work he can do at training in the lead-up to the grudge match in Brisbane, with QRL boss Bruce Hatcher vowing to put Munster's health first.

"It is absolutely vital the independent evidence of a medical professional or specialist is by far the most necessary intervention in this type of injury," he said.

"It is a tough game, the people who play it are tough but there are times they need to be protected from themselves. There are times you need to have the independent assessment, which the NRL will enforce.

"It goes consistently for both teams and it's not as if one is getting an advantage over the other. You can't take any risks at all."

The NRL is considering a report from the NSWRL over their handling of Cordner's head knock, which triggered the Blues captain to withdraw from the rest of the series.

The Maroons' left edge, which Munster usually mans, was torn apart by a rampant NSW, now trying to win their first series decider in Brisbane since 2005.

Queensland utility Ben Hunt was thrown into Munster's position and will revert back to the bench if the 26-year-old is declared fit. And St George Illawarra's million-dollar man admitted he was caught off guard being thrown into the fray so early.

Asked whether he had spent any time training at five-eighth, Hunt said: "Not at all. I’ve had a few runs with the reserves against the starting side in the halves, but nothing in the starting side. I was caught by surprise going in there, I guess.

"I was put in there to do a job and I think I was a bit off the pace. I obviously wasn't expecting to go in there and I was preparing for something else. I should have been better than I was, there's no excuses for that. At the same time I wasn’t really preparing to play there."

Bennett opted to rest Munster's Melbourne teammate Christian Welch from the drubbing in Sydney after he suffered a head knock in Adelaide.

The Blues will be gunning to win a third straight series for the first time since 2005, when Andrew Johns starred in NSW's convincing game three win north of the border.

But Hunt remained buoyant about Queensland's chances of turning the tables.

"We know we were bad and we know we can be a lot better than that," he said. "We just need to turn up like we did in Adelaide with the want and desire to win and go after them."