Home » Rugby » ‘We were lucky it wasn’t 50-0’: Panthers blow away cobwebs with shutout of Cowboys

North Queensland coach Todd Payten said his side were lucky they were not flogged 50-0 by Penrith.

The Panthers kick-started their premiership hunt with a convincing 24-0 blowout – but they could have won by so much more. 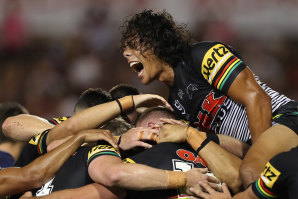 The Panthers celebrate a try by Kurt Capewell on Saturday night.Credit:Getty

“We came here looking for a long, hard game. I was happy we were getting ourselves into field position, we were defending well and putting pressure on them. We were never going to play our best football tonight and I think that showed.”

A deflating silence fell across the 14,077 fans at Panthers Stadium when their side led only 8-0 at the break.

They had enjoyed 65 per cent of possession and were tackled inside the Cowboys’ 20m a whopping 38 times, yet only had one Kurt Capewell try and a couple of Nathan Cleary goals to show for it.

But the Cowboys started to run out of puff early in the second half as Cleary, Jarome Luai, Dylan Edwards and the rest of the Penrith gang got to work.

Edwards galloped through a yawning gap for a try, then Brian To’o scored in the corner after the ball was spread left via his Mt Druitt mates Luai and Stephen Crichton.

Isaah Yeo crossed under the posts when Liam Martin leapt highest to come down with a Cleary kick. Braith Anasta quipped on the TV coverage “is it Liam Martin or Dusty Martin”, in reference to the Richmond cult hero.

Penrith are premiership favourites and have already been given a good chance to go one better this year after their grand final loss to the Storm.

They meet former assistant coach Trent Barrett’s Canterbury side next Saturday before hosting Melbourne on what will be a blockbuster round-three Thursday-night clash at Panthers Stadium.

Cleary has heard all the talk about how his young group may drop off after such an intense 2020 campaign – they won 17 on the bounce – but the coach said after the Cowboys win: “We’d like to think we’ll be tough to beat … we’ll have to find out. Time will tell, it’s a long year.”

James Fisher-Harris ran for nearly 200m and almost had a try, while Cleary came up with a 40/20 courtesy of a torpedo bomb, and his couple of speedy runs early in the second half led to a couple of tries.

Payten was happy with some of the early defensive efforts, but not their completion rate.

“We played a good team, but if we play the way we did tonight in terms of ball security, we don’t beat anyone – it was ordinary,” Payten said. “We tackled ourselves to a standstill. We were lucky it wasn’t 50-0.”

Payten also defended limiting the minutes of Jason Taumalolo and said: “I’ve said it several times, Jase is contracted here for seven years, and if we cook him 65 to 75 minutes a game, in three to four years, what value will we get out of him?”