Home » ‘We have got to be better than that’: Ratten bemoans Saints’ finish

Despite winning their fifth match of the season St Kilda coach Brett Ratten made it clear to his players that their finish was nowhere near acceptable after North Melbourne outscored them by 23 points in the last quarter after trailing by 43 points at the final break.

A clearly frustrated Ratten said it was disappointing to see players unwilling to help their teammates fulfil the roles they had been assigned and the team move away from the game style when the result was decided.

“We have got to be better than that,” Ratten said. 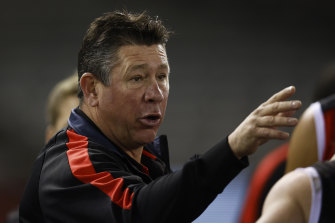 Brett Ratten was frustrated his players weren’t willing to help each other and didn’t stick to the game plan, despite their win. Credit:Getty Images

“To get the four points is what we were after but the last quarter was not to our liking at all.”

The win keeps the Saints in reach of the top eight but the form of key players remains a concern with high-priced recruit Brad Hill finishing the match with just six touches. He was tagged by Bailey Scott but Ratten conceded he needed to improve even though he tried to defend his performance.

“He tried to assist others, yeah he got sat on and [Bailey] Scott did not want to touch the ball really and just made him a sole focus,” Ratten said.

“He was helping our team defence even though he wasn’t getting the ball a lot but he has got higher standards than what he achieved tonight and we will keep pushing for that.”

Hill has battled for form and was moved to half back in round seven after a string of below par performances.

“He is a good player and we have got to try to tap into how we can bring him into the game,” Hill said.

“We’re not playing great footy at the moment but we got the four points.”

Ratten said they would keep striving to win enough games to make the finals but they would need to improve.

“We’re not playing great footy at the moment but we got the four points,” Ratten said.

Noble was equally frustrated with his team’s inability to play four quarters with the lack of pressure early a real concern.

“We only had seven tackles in that second quarter, which was really poor.”

“We only had seven tackles in that second quarter, which was really poor,” Noble said.

“We didn’t bring that pressure that we wanted to and credit to the Saints, they owned the corridor, they forced us to go a bit wider, they slowed us down on our ball movement. We won the second half but we are still chasing that consistency of a four-quarter effort.”

He said the decisions the team made when moving the ball was the biggest area they needed to improve but he was confident they were improving.

Noble said Ben McKay was taken from the ground with a back injury rather than the suspected hamstring injury and he was hopeful Robbie Tarrant would return soon after the bye although they would be cautious.