Coach Jay Tregonning hopes the influence of Aussie sevens star Sharni Williams in a record-equalling fourth Rugby World Cup appearance will help the Wallaroos put a disappointing Test season behind them and snatch a play-offs berth.

Williams, 34, was the notable addition to a 32-player Wallaroos squad named on Wednesday, which will contest the World Cup in New Zealand next month. Scheduled for 2021, the tournament was delayed a year due to COVID and global travel restrictions.

Though an Olympic gold-medal winning sevens star, Williams will play in her fourth 15-a-side Rugby World Cup as a centre, after playing at the 2010, 2014 and 2017 tournaments. She will join Tui Ormsby and Louise Burrows as four-time World Cup players, and re-unite with current Wallaroos skipper Shannon Parry, who was a long-time co-captain of the Aussie sevens team with Williams.

Currently in South Africa with the Australian women’s sevens squad for the Sevens World Cup, Williams is expected to join the Wallaroos in camp as early as next week, before Australia’s World Cup opener against New Zealand at Eden Park on October 8.

“We are pretty lucky to have someone of Sharni’s experience, who will contribute on and off the field in regards to our development, that’s for sure,” Tregonning said.

After scoring two tries on debut in Adelaide, sevens speedster Bienne Terita was also named in the World Cup squad, which stuck closely to the Wallaroos squad for the recent Four Nations Cup and Laurie O’Reilly series. Iliseva Batibasaga will play in her third World Cup, after making the 2006 and 2010 squads but then missing the next two tournaments. 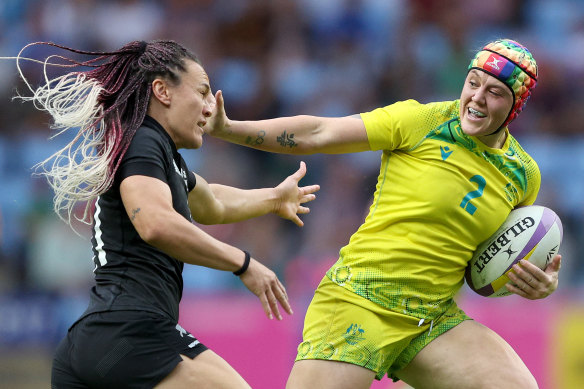 This year has yielded a string of poor results for Tregonning’s Wallaroos, however, with Australia crashing to Japan, USA, Canada and New Zealand three times. A win over Fiji in May was the only victory, albeit in their first Test since 2019.

But after the Wallaroos bounced back from a 52-5 thrashing in Christchurch to push the Black Ferns in a tighter 22-14 defeat in Adelaide, Tregonning says there is cause for World Cup optimism.

“Reviewing that last game, we do a few things differently and we’re even more competitive as well. So there’s definitely some positivity there,” Tregonning said. 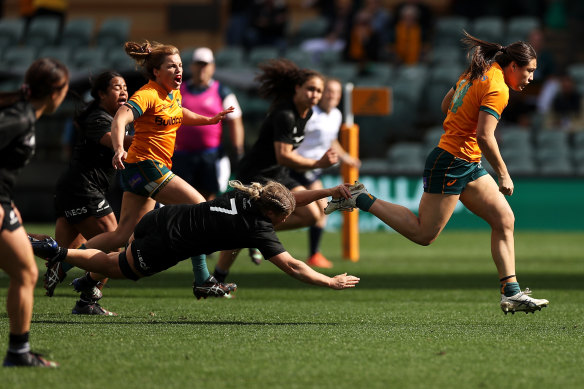 Bienne Terita on her way to scoring a double against the Black Ferns.Credit:Getty

“Obviously the game in Christchurch, from the performance point of view, we weren’t at our best. I know the results haven’t been great this year but some of our performances and development have been positive. We are performance-focused and obviously have the goal of making the quarter-finals, which means to securely do that we need to win two out of the three pool games. And we have confidence we can do that, and obviously we have the opportunity to play the Black Ferns again.”

Tregonning made a huge call to drop Wallaroos star Grace Hamilton for the Christchurch Test, having replaced her as captain with Parry earlier in the year. Hamilton was recalled for the Test in Adelaide and was one of Australia’s strongest performers, but the coach said his decision to drop the 30-year-old wasn’t done as a motivational tactic.

“We talk about competition at training and we felt that young Grace Kemp was out-performing her in that first bit leading into the Test in Christchurch,” Tregonning said.

“It was obviously a hard discussion to have but Grace [Hamilton] really ripped in and earned her way back into the starting side, through her work, even leading into the Christchurch Test as part of the non-23, and then obviously at the beginning of that next week when selection was back on the table for the Adelaide Test.

“It is what we are trying to do as a group and players are aware of that, giving players opportunity to perform at training and put their best foot forward for selection. I am not trying to play mind games with them at all. These are the expectations and the standards we are trying to set with regards to performance, and some players respond in different ways to that.

“Obviously, we were extremely happy with the way Grace responded, in training and even as part of the non-23, she really ripped in and got around the playing group that week, which was great.”

Asked about the morale and unity of the team after a run of six Test losses heading into the World Cup, Tregonning said the Wallaroos remained “solid”.

“Overall, that high pressure/high performance environment, some things could be working a bit better but the whole honesty and performance in the group has been positive. Everyone has ripped in,” he said.

“We are very competitive at training but off the field, the group is solid. We want to try and establish the culture of hard work and competitiveness. The group enjoy their time together. We are a large group of different personalities, and that’s life and that’s most workplaces as well.

“We are trying to put things in perspective and obviously we have had a bunch of losses. The loss against Japan was a difficult one to take … but all the other games have been against teams who’ve been well above us in the world rankings for the last decade.

“We have been really competitive in those, and obviously disappointed with results. But it has given us an opportunity to learn where we have to be better to beat these teams above us.”

Watch every match of The Rugby Championship on the Home of Rugby, Stan Sport. All matches streaming ad-free, live and on demand on Stan Sport.