Wallabies coach Dave Rennie is poised to name an unchanged starting XV to face the Springboks on Saturday in Sydney when he announces his team later on Thursday.

Fresh off a 25-17 victory over South Africa in Adelaide at the weekend, Rennie will back the same players in the run-on team to make it back-to-back victories over the reigning world champions at the freshly rebuilt Allianz Stadium.

It is a rarity for Rennie to pick the same starting side in consecutive matches.

Noah Lolesio will retain his No.10 spot after an excellent performance at the Adelaide Oval and will have Hunter Paisami and Len Ikitau outside him in the centres.

Reece Hoodge will wear the No.15 jersey, while Marika Koroibete and Tom Wright are once again set to feature out wide. 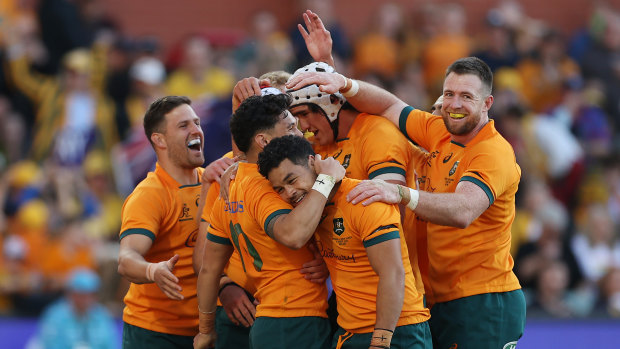 The Wallabies celebrate their win in Adelaide.Credit:Getty

Back-rowers Jed Holloway, Fraser McReight and Rob Valetini will get another opportunity to jell together without regular skipper Michael Hooper.

While Rennie won’t name his matchday 23 until 1pm AEST, prop Angus Bell could come onto the bench after overcoming a foot injury.

The Springboks have made nine changes to their starting XV.

Watch every match of The Rugby Championship on the Home of Rugby, Stan Sport. Continues this weekend with All Blacks v Argentina (Saturday 4pm AEST) and Wallabies v South Africa (Saturday 7pm AEST). All matches streaming ad-free, live and on demand on Stan Sport.