Home » Rugby » Wallabies are now the hunted, and must tighten up

The 31-17 win against Argentina on Saturday was a hard Test to assess, and it would be easy to get carried away with the brilliant tries the Wallabies scored in the second half. With the game in the bag, they clocked off a bit, but that wasn’t the part of the game where they must be hard on themselves.

Frankly, there was a bit too much fluff in the first half, too many flash plays and needless offloads that threatened to undo the great platform given to them by the dominant scrum. They got away with but as they head to the northern hemisphere, they must acknowledge that recent wins have put a target on their backs and they aren’t good enough to get loose too early.

All the focus was on Sean McMahon, but the eye-catching return on the Gold Coast came from Tom Wright. The Brumbies winger was badly out of sorts earlier in the test season, but he was electric during a 29-minute spell off the bench. He looked fast and powerful, and the timing of some of his passes was excellent.

Throw in try machine Andrew Kellaway and the Wallabies have some weapons out wide. The Wallabies will trim their squad for Japan and Europe, but Wright would be in my touring party. 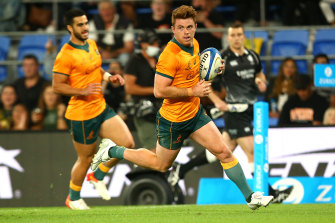 Andrew Kellaway scores a try against Argentina, with Tom Wright in support.Credit:Getty

The lesson from the Rugby Championship? Forget about winning the big Tests, or big tournaments, unless you have some blokes in their 30s in your 23. Frans Steyn was brilliant off the bench for the Springboks as they beat the All Blacks in a thriller, using his big boot to dominate the territorial battle.

Experienced playmaker Elton Janties, 31, was just as influential, and his introduction seemed to bring out a completely different side to Handre Pollard, who moved out one spot in the backline.

The sight of Samu Kerevi on crutches at the end of the Pumas Test brought down the mood considerably, and the fears only grew when Dave Renie used the dreaded ‘S’ word afterwards – syndesmosis.

Players can be looking at months out with a bad one, and the Wallabies might have to do without Kerevi for the entire tour to Europe. That is going to challenge them, because his partnership with Quade Cooper was humming again on Saturday.

Let’s be honest: do the Springboks get up for Wallabies as much as they do for the All Blacks? The past two weeks suggest they do not. However, don’t take too much away from the Wallabies, because they handled the Springboks’ vaunted ‘Bomb Squad’ forwards better than the All Blacks. 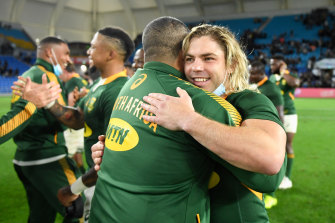 The Wallabies’ scrum is now one of the strongest and most reliable parts of their game, and the Taniela Tupou v Allan Alaalatoa debate really is one of those ‘good’ problems. And, on the other side, James Slipper is getting better with age.

It’s a good spot to be in before those Tests against Scotland, England and Wales.

Cully’s team of the week

Stan Sport is the only place to watch the Wallabies v Japan – streaming ad-free, live and on-demand on Stan Sport on Saturday 23 October from 3:45pm AEST.