The Brumbies have stunned the Chiefs 26-14, putting a week of health uncertainty behind them in an emphatic trans-Tasman Super Rugby boilover.

In a clash of two conference-leading teams, the Brumbies played one of their most compelling halves of rugby in Hamilton on Saturday to lead 19-0 at the break, before repelling the home side's threat of a comeback. 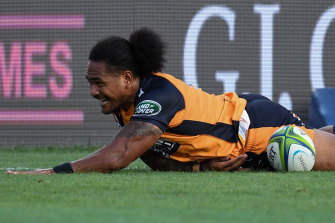 Brumbies winger Solomone Kata slides in for a try against the Chiefs.Credit:AAP

The Brumbies hadn't won in New Zealand since 2014 – and not in Hamilton since 2007 – but played inspired rugby from the outset, running in a fourth unanswered try early in the second half to go 26 points clear.

Two quickfire tries got the Chiefs back in contention with 25 minutes still to play but they couldn't cross again, handing them a first loss under new coach Warren Gatland.

"I think the boys were just holding on to that grudge from last week and how lost the game in the last two minutes," he told Sky TV.

"We definitely knew that the Chiefs would come back hard in the second half, which they did. We did really well to hold them out there."

The Canberra side's performance was all the more remarkable given a mumps outbreak that struck about 10 days ago, rendering some squad members unable to make the trans-Tasman trip.

Alaalatoa said it affected their preparations.

"But everyone that travelled was cleared, that was the most important thing. I'm just looking forward to seeing the boys who were affected back home."

Rookie five-eighth Noah Lolesio threw a handful of expert offloads to create space and lively fullback Tom Banks was a beneficiary with the opening try.

Quick hands from Banks set up winger Solomone Kata soon afterwards before a try-scoring double to standout No.8 Pete Samu either side of half-time.

The first came through a dominant scrum and the second via the back-rower's athleticism, slicing past three tacklers on a 30m run.

Starved of ball, the flustered Chiefs committed basic mistakes and fell off tackles.

They began to hold possession and the Brumbies conceded a run of penalties, one of which resulted in a yellow card to Slipper for a professional foul.

Aaron Cruden and Anton Lienert-Brown crossed for tries but it didn't help the post-match mood of Chiefs captain Sam Cane, who said his team "were pretty much still on the bus" throughout the first half.

"Credit to the Brumbies side. They came here desperate with some real hunger, and right from the first whistle pretty much to the 80th, they beat us to the punch," All Blacks breakaway Cane said.

"We were a little bit shell-shocked and it wasn't until that 45th-50th minute that we kicked into gear, but not for long enough."