Hosting the 2027 Rugby World Cup final at the MCG in Melbourne rather than in the sport’s traditional heartland of Sydney would turbocharge growth and interest in the game and could help transform the finances of the sport, Victorian rugby chiefs believe.

With the decision to award Australia hosting rights announced in Europe on Thursday night, cities and venues are jostling to host the biggest games.

Three venues – Stadium Australia in Sydney, Optus Stadium in Perth and the MCG in Melbourne – tick all the boxes for size and capacity and the final will be played in one of them. 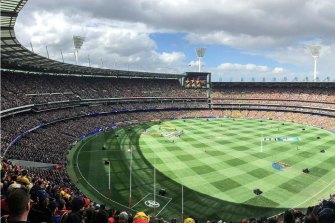 The iconic MCG in central Melbourne.Credit:MCG

Sydney is the game’s heartland, but, as Victorian officials argue, if the Australian Rugby Union and World Rugby want to grow the game and maximise their revenue opportunities then the MCG is the obvious choice.

The Victorian government has backed the push for the decider to be staged in the state capital, with Sports Minister Martin Pakula earlier this week declaring: “We’ve strongly advocated that in our discussions with Rugby Australia and the Rugby World Cup.”

“We are the events capital of the nation, with a sporting precinct that cannot be matched.“

Melbourne Rebels chairman Paul Docherty’s enthusiasm for the potential of the sport is infectious and he argues that hosting a game like the final could take Victorian rugby to the next level.

“Melbourne and the MCG are putting our best foot forward through Visit Victoria and the minister. We want to host the final of the Rugby World Cup. It would be unbelievable for the game,” he says.

“Five years ago when the community took back the reins of the game from private ownership we had one local Victorian player contracted in the Rebels squad. Today 40 per cent of the squad is brought up here. They are our young products.

“The 2029 Women’s World Cup is also being awarded and we have exponential growth in both the mens and women’s and boys and girls games. Three of the biggest growth corridors in rugby in Australia are in the south-east of Victoria, the west and the north.

“The MCG is the greatest facility of its kind in Australia. It has got 100,000 seats, which is 20,000 more than anywhere else in the country today.

“As a sports community and home of sports in Australia, we have, with our sporting precinct incorporating the MCG, AAMI Park and the tennis centre, an unbelievable opportunity to facilitate a wonderful event for the broader community, not just rugby.

“For World Rugby and Australian Rugby which, has had a tough period, it’s the opportunity to raise as much money as we can for future generations and that’s why we are trying to make Melbourne and the MCG the place for that final. We believe the growth of the sport is in places that are not necessarily the traditional ones.

“We respect the fact that NSW and Queensland are the home of the game in this country but we want to make a big statement here and we think hosting the final of the Rugby World Cup is one way to do that.“