Home » Rugby » ‘Up the Pies’: Hope and despair on the long road to (and from) Sydney

It’s 1am on Saturday at Southern Cross Station and I’m surrounded by almost 300 Collingwood supporters. Five buses bound for Sydney are lined up to take them to the Pies preliminary final against the Swans and I’m embedded in the fans’ inner sanctum. I’m going along for the ride.

They’re a diverse bunch all wrapped up in Pies scarves and beanies – everyone from older cheer squad members, to raucous young blokes and women and families with children. I walk past a group and get an enthusiastic “Up the Pies!” I am, coincidentally, wearing black and white. 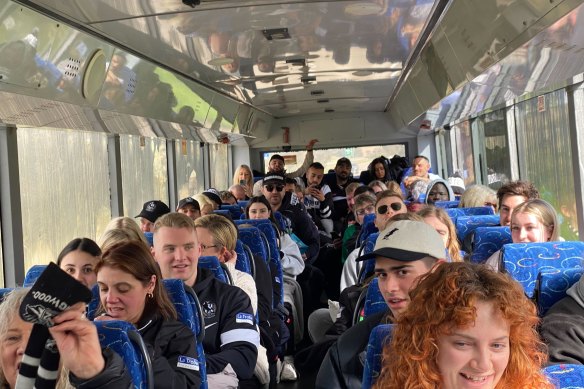 AFL Collingwood fans on a bus from Melbourne to Sydney.Credit:Najma Sambul

On my bus is Jodie Wilcock, who travelled from Kalgoorlie in Western Australia to hitch a ride with her fellow Pies.

Two years ago during COVID lockdowns, Wilcock’s dad, a passionate Collingwood supporter, died in Melbourne. She was unable to attend his funeral because of WA’s hard border. His ashes remained at the funeral parlour.

“When they opened up the borders I said to Dad: ‘Get me to a prelim, and I’m getting you out of the funeral parlour and taking you to the footy’.”

She didn’t, though, so confident was she that Collingwood would beat the Swans. Her plan was to take his ashes all the way: to the grand final. 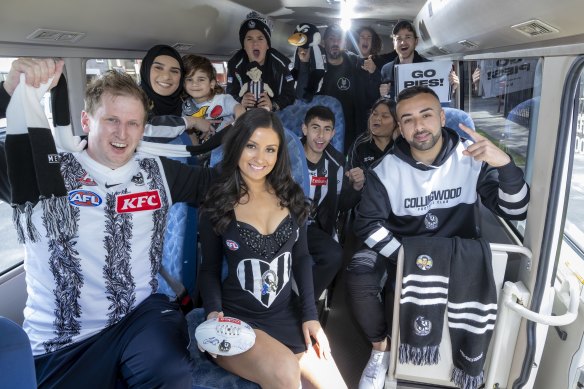 Full of hope: Collinwood fans before embarking on the trip.Credit:Wayne Taylor

As the bus begins to leave, a group of young Pies fans sitting at the back start to chant “Oooooh Jordan De Goey,” people stomp their feet and bang on the windows. Others yell out “Carn the Pies” and “Up the Maggies”. It’s a Pies symphony orchestra.

Mohamed Abdelaal, one of the loudest says “Geelong we are coming for ya!” He’s called the win early. If the atmosphere on the bus is anything to go, the rest agree. They may as well be off to the grand final.

Up the back a conversation about Collingwood’s controversies is underway. The dissent over race that played out involving former player Heritier Lumumba, who in 2017 called Collingwood a “boys’ club for racist and sexist jokes” was prominent. On this bus at least, there was strong support for former club president Eddie McGuire.

“Every club has a Try Harder report,” says 59-year-old John Giani at the next rest stop. “It’s not just Collingwood.”

Giani just hopes that the club can move on from its past.

5 am: The bus is barrelling along the Hume highway between Holbrook and Gundagai. Someone next to me throws up in a bag.

6.30am: The sunrise invigorates the supporters. Cars with Collingwood scarves hanging out of the windows wave and beep as they overtake us.

1pm: It’s been a rugged night but we’re nearly there. We’re driving through Sydney’s eastern suburbs. The Collingwood chants have not stopped for the past 20 minutes and as we drive past a local playing field and a sign saying “Moore Park”, someone yells “It’s Darcy Moore Park now!”

Weary and sleep-deprived, the Pies fans clamber off the bus and head to Watson’s EQ pub, inside the Equestrian Centre where the SCG is located. Some make a beeline for the toilets to freshen up, others go straight to the bar. “I’ve never needed a beer more in my life,” I overhear someone say.

Bounce: As the time draws closer to the first bounce at 4.45pm, Sydney fans descend on the ground in waves. Their presence makes the Pies crowd look tiny, but still Collingwood supporters chant on. 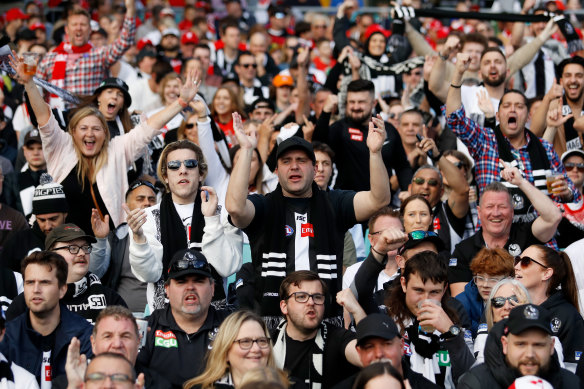 7.33pm: The final siren blares. The Swans have won by a point. Ahead lies a long and desolate bus ride back to Melbourne.

“We stood there in shock,” 15-year-old Summer Richardson says. “I was crying so hard after I saw Jack [Ginnivan] and Nick [Daicos] crying.”

Now there’s a dilemma. Earlier in the week passengers agreed on an 11pm departure time, win or lose. But the result has made them eager to get home quicker. Organiser Mitchell Taleb, decides to stick to the plan.

Glenda Wilson, 70, heads to the pub. Swans fans are there in numbers, celebrating. “We all would’ve liked to just go back on the bus and go home,” she says. “They weren’t the enemy any more, they were just another lot of supporters happy to win.”

Going to the pub helped with the loss, Wilson says. “By the time we got on the bus we were all disappointed but it helped.”

11pm: They call the roll for the trip home. It’s a far less streamlined than at Southern Cross in the small hours. I ask a fan how he’d describe the vibe. “There is no vibe,” comes the reply.

Four people decide they can’t face it again. They catch a plane home.

The aftermath: The loss, however devastating, does not detract from Collingwood’s season. Some with perspective, like Jodie Wilcock, predict future success.

“Normally I would be gutted. I’ve been to five lost grand finals. I’m not shattered. It’s lifted everybody. This year has brought everybody back to one again,” she says.

“I haven’t felt this excited by Collingwood since I was in my 20s and now I’m in my 50s … They’ve taken us on a wild ride this season, and why would we want to get off?”