Greater Western Sydney did not leave Hobart a loser on the scoreboard but their finals hopes were dealt a brutal blow, as North Melbourne blew a golden opportunity for a rare win on Sunday.

Outplayed for three quarters, the Giants finished with a wet sail, coming back from 28 points down at the final change, but they could not stick their beaks in front. They had to settle for a draw – 14.10 (94) apiece – though the result did little to further their September aspirations. 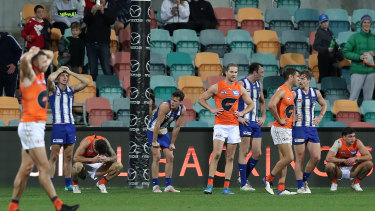 Players from both teams look dejected after the game ended in a draw.Credit:Getty

It was also two premiership points lost for North, who played some of their best football of the season but melted when the pressure came on late.

Jy Simpkin was a key player with 31 disposals, though he will rue a lack of composure late when he put his clearing kick from defence out on the full, which set up a Giants goal.

Ben Cunnington, one of the best afield, was influential in the clinches – and against a high-quality opponent in Callan Ward.

Aaron Hall, playing in defence, was involved in some key plays and though he made some mistakes with his disposal, that can happen when you get it 35 times. 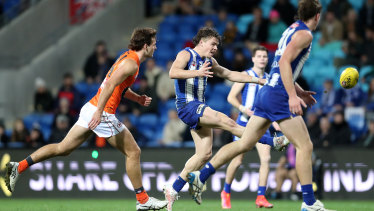 Cameron Zurhaar kicks a major for the Kangaroos at Blundstone Arena.Credit:Getty

That the Giants were in the hunt for as long as they were was testament to the games of Josh Kelly and Nick Haynes.

Kelly was pivotal to everything the Giants did, collecting 39 disposals. His freakish snap on his right foot early in the last term sparked his team’s revival.

Haynes was back to his All Australian best, thwarting numerous Kangaroos’ forward thrusts with his ability to read the play and intercept in the air.

The Giants did not start like a side with their season on the line, giving up four of the first five goals in an opening similar to their horror beginning a fortnight ago against Brisbane. 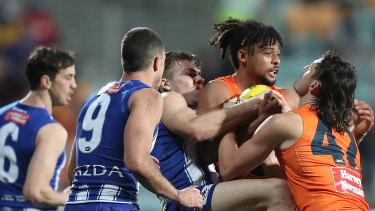 Connor Idun of the Giants is wrapped up by Cameron Zurhaar.Credit:Getty

North, however, are not a premiership contender, but the wooden spoon favourite. For much of this season they have been uncompetitive but their pressure forced the Giants into panicked kicks.

The goals have been hard to come by for the Kangaroos forwards but the hard work of their teammates up the field created many opportunities. Nick Larkey and Cameron Zurhaar were dangerous, so too Jaidyn Stephenson.

Not much was going right for the Giants, who could not break down North’s committed team defence. Their goals came from unforced errors, and often in time-on when the young Kangaroos’ concentration lapsed as fatigue set in.