Detectives from the Fixated Persons Investigation Unit launched an investigation this week after the NRL Integrity Unit reported the messages to NSW Police. 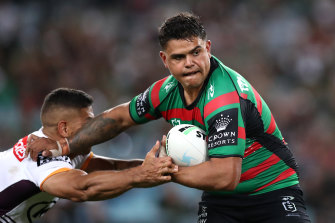 Two men have been charged after allegedly abusing Latrell Mitchell via social media.Credit:Getty

The men were taken to local police stations and charged with using a carriage service to menace, harass or cause offence.

They were both granted strict conditional bail.

The Rabbitohs has released a statement on the matter and said Mitchell will speak about the alleged abuse during a press conference on Monday.

“Racism is absolutely abhorrent and has no place in our game or society in general.

“We fully support Latrell’s decision to refer the abuse to the NSW Police. Latrell has shown great courage in
taking this position, and I would encourage other NRL players who are subject to abuse of this nature to do the
same thing.”

NRL boss Andrew Abdo said Mitchell reported the abuse to the integrity unit over the weekend.

“Our Integrity Unit immediately investigated and referred our file, with the support of Latrell, to NSW Police to commence a criminal investigation,” Abdo said.

“There is no place for fans like this in our game. Any fan who racially abuses or threatens our players will be referred to police.

“I want to commend Latrell for the leadership role he is taking. We wholeheartedly support Latrell in reporting this matter. He is a leader in the fight against racism in our community.”

On Tuesday, Mitchell was rubbed out for four matches after being found guilty of a grade-two dangerous contact charge for an incident involving Wests Tigers winger David Nofoaluma.

The heavy suspension period has destroyed Mitchell’s Dally M Medal hopes and have left him with just two games to convince NSW coach Brad Fittler he deserves a State of Origin recall.