Tristan Sailor, an emerging NRL player at St George Illawarra for the past two seasons and the son of rugby league icon Wendell Sailor, has been arrested in relation to a report by a woman that she was sexually assaulted in southern Sydney last weekend.

The 22-year-old utility back, who lives with his parents in Wollongong, was taken into custody on Saturday morning. 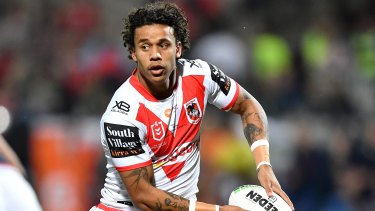 Tristan Sailor on debut for the Dragons against the Roosters last year.Credit:NRL Photos

"A search warrant has been executed at a home at Wollongong this morning at 7.40am," a NSW Police Force spokesperson said. "A 22-year-old man has been arrested and taken to Wollongong police station."

In an earlier statement on Friday, prior to his arrest, police said they were investigating reports a woman was sexually assaulted by a 22-year-old man last Saturday night.

"The investigation is being led by detectives from St George Police Area Command, with the assistance of officers from the Child Abuse and Sex Crimes Squad," a police spokesperson said.

The NRL integrity unit has been made aware that Sailor has been under investigation and has been arrested.

Sailor is without a club after being told last month he would not be offered a new deal at the Dragons under incoming coach Anthony Griffin.

Sailor's surname had heightened interest in the impact he might have at the Dragons as he came through the ranks as a local junior and made his first-grade debut at halfback in round 23 last year.

But he has made only five appearances for the club over the course of the 2019 and 2020 seasons and after struggling to break into the side this year, he has been left to find a new team.

It was a decision that disappointed his famous father, Wendell, a dual international who finished his decorated career at the Dragons in 2009. 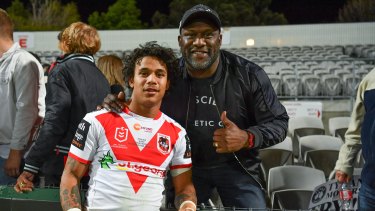 "He got two games off the bench and was expected to pull off the miracle play with limited game time," Sailor snr told Wide World of Sports a fortnight ago.

"Now they say he is not wanted – my wife and I are very disappointed that he never got the opportunity to show what he's got on the field.

"He's done everything right all year. He couldn't even come to my mum's funeral because he was in the bubble, but he accepted that and now they cut him."