Those troublesome hamstrings appeared to have held up for that period, but here endeth the good news for Manly and "Tommy Turbo". 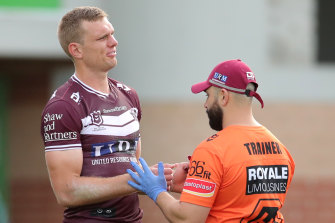 Tom Trbojevic after injuring his shoulder against the Titans.Credit:Getty

A season that started with so much promise for Manly can't end quickly enough. Trbojevic has been missing for most of it. Nobody could have seen it at the time, but the Sea Eagles' season effectively ended when he limped off Campbelltown Sports Stadium in round six.

The superstar fullback hasn't played for three months and it showed. He did his best to make up for lost time but his timing and fitness were understandably off.

On three occasions, Trbojevic made blunders that led to opposition tries. He dropped a pass in the lead up to try to Sam Stone, gifted Proctor another when he failed to clean up a kick and then hurt himself when Brimson got past him.

In all, the Silvertails let in eight tries and crossed for only four of their own. The last two were the consolation variety as the Titans switched off after securing the result. 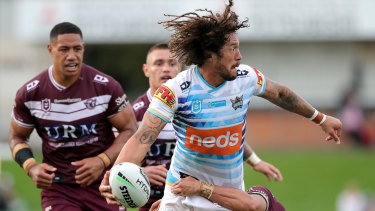 Kevin Proctor gets away an offload against the Sea Eagles.Credit:Getty

The season will mercifully end for Manly soon, but is over too quickly for the Titans. Their latest victory is their fourth straight, a streak they last achieved in 2014. At the time of writing, Justin Holbrook's men were sitting in ninth spot on the ladder. Had the regular season run for the customary 25 rounds, they would have had every confidence of further improving their station.

It started well enough for the hosts when Jack Gosiewski scored the first try of the match in the opening minute. But it was all downhill from there. The Titans, despite having less possession than their opponents, dominated for all but the very start.

This was an early peak at life at Manly without Addin Fonua-Blake, who was missing with a knee injury. It doesn't look good.

So much focus was on Trbojevic, but it would be remiss not to mention the opposing fullback. AJ Brimson, having overcome a series of his own injury setbacks, is now fulfilling his undoubted promise.

Brimson scored his side's opening try, a perfect example of his speed and game awareness. With Manly struggling to regroup defensively after conceding a seven-tackle set, the Titans took the quickest of quick taps, allowing the 21 year old to streak away.

Then he showed superb hands in tipping on the ball in the lead up to the first of Young Tonumaipea's two tries.

The result came exactly 42 years after Manly's famous 1978 grand final win. That is now a distant memory, as will be the family hill that is about to get demolished as part of a refurb of Brookvale Oval. There will need to be other changes on the northern beaches to ensure the club isn't so reliant on one player.