We take a look at five of the biggest names on the trade market heading into a fascinating off-season.

When he was winning premierships and Norm Smith medals for fun, the last thing you ever expected to hear about Dusty was the potential for him finishing his career at another club. But that potential is very real. The superstar midfielder has been crushed by the loss of his father and has grown tired of living in the Melbourne bubble. While the Swans are certainly interested, they would struggle to fit him into their salary cap, even if Martin decided to take a pay reduction. But the Gold Coast Suns, particularly after the news that forward Izak Rankine has requested a trade to Adelaide, remain a viable option for him. It all hinges on Martin. If he decides he wants to leave, the Tigers won’t stand in his way. But if he believes he can rediscover his passion of football at Punt Road, he will finish his career as a one-club player. 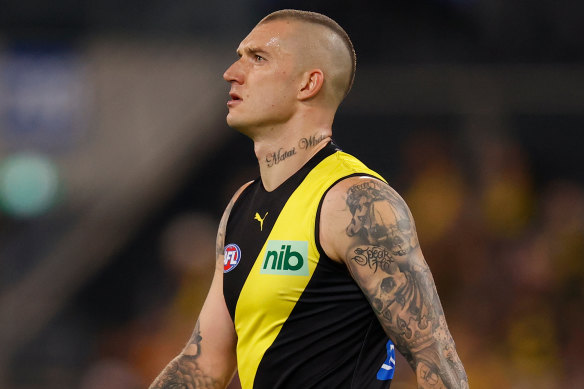 The contracted Giant is still deciding between Geelong and Richmond, who have both tabled lucrative long-term offers. Significantly, the Cats have dropped out of the race for Jordan De Goey to focus all of their attention on Hopper. But the player, himself, is torn. People close to him are suggesting that Geelong would be the better fit, but Hopper also likes the idea of playing in front of 75,000 people at the MCG every second week. Richmond are also of the belief that they can fit both Hopper and his Giants teammate Tim Taranto into the salary cap, but that most likely hinges on whether Dustin Martin entertains the idea of playing somewhere else next season.

It’s been a difficult year for the midfield bull. Having returned from injury, he hasn’t quite been the same player that won a best and fairest in a grand final year in 2019. To cap things off, he’s been offered a contract extension to stay at the Giants, but at reduced pay. That’s not necessarily a reflection of GWS not rating him; more so that their salary cap is overflowing with five players earning either close to, or more than, $1 million next season. Like his teammate Hopper, he has offers on the table from two Victorian powerhouses. His options are Richmond and Collingwood and recent reports suggest that he has verbally committed to Richmond on a long-term deal. The Tigers see him as a long-term replacement for Trent Cotchin, while the Pies are desperate to add grunt to their midfield. Taranto is out of contract but not a free agent until 2024, meaning clubs will have to trade for him. 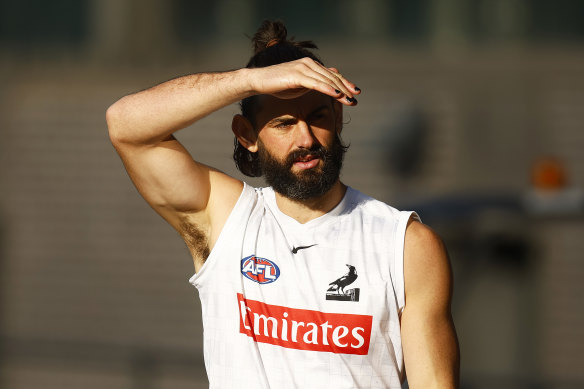 Brodie Grundy has missed most of this season with injury.Credit:Getty Images

It’s not quite Adam Treloar all over again, but it’s not far off. Early in 2019, Collingwood had a list management meeting where it was decided that, due to salary cap constraints, the club would have to lose one of Darcy Moore, Jordan De Goey or Grundy. Months later, they believed they rectified the problem and essentially pushed the problem into the future. Now, the Pies have a ruckman with five years left on his contract at $1,000,000 per season. The club is actively trying to move him to another club, but Grundy is desperate to stay. He had a positive meeting with Melbourne, which was attended by Simon Goodwin and Max Gawn, but he still believes his future is at Collingwood. Unless the Magpies are willing to pay a significant chunk of his salary to play somewhere else – like what they’re doing with Treloar – it looks hard to see him moving.

After his latest indiscretion in Bali, it looked odds-on that De Goey would be playing somewhere else in 2023. That may still happen, but the exit of Geelong from the race for his services, and his brilliant recent form – not least of which was his superb performance in Saturday’s losing final – means circumstances have changed. He essentially has two options. He can stay at Collingwood and sign a heavily incentivised contract. Or, he can move to St Kilda on a long-term deal that will provide him with more guaranteed money. For such a talented player, De Goey has been disappointingly inconsistent over the course of his career. In eight seasons, he’s averaged 17 disposals and less than a goal a game. His best season was clearly 2018, where he kicked 48 goals as a mid/forward and helped his team to finish agonisingly close to a premiership. But even in that season, he didn’t finish in the top five of the best and fairest, which in retrospect appears harsh. His best-on-ground display against Geelong in a qualifying final makes it harder to let him walk out the door.