A terse Ivan Cleary has swatted away questions about his war of words with master coach Wayne Bennett, defending his Panthers team which he insists is in “great shape” as they try to avoid a shock finals exit.

However, that job was made harder on Friday night as star winger Brian To’o was ruled out of Saturday night’s clash with Parramatta with a minor ankle injury. Brent Naden will be brought in as To’o’s replacement.

Earlier, in Cleary’s final pre-match press conference before the western Sydney derby against arch rivals Parramatta, the Penrith coach was abrupt when quizzed over his stoush with Bennett, and refused to elaborate on his starting team and the role of wrecking ball Viliame Kikau.

The coach was in no mood to harp back to a series of barbs traded with Bennett both before and after South Sydney’s upset win over Penrith, only stating he didn’t think it had an effect on his team’s performance and he “believed what I said”.

Cleary called out the Rabbitohs for their pressure on his son Nathan’s kicking game, prompting Bennett to accuse the Panthers of using illegal blockers to protect the superstar halfback. 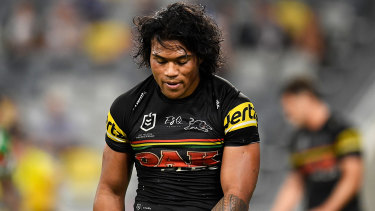 Brian To’o has been ruled out of Saturday night’s semi-final with an ankle injury.Credit:Getty

In his press conference after Penrith’s loss, Ivan urged the NRL to consider cracking down on coaches who try to influence match officials before a game. Just minutes later Bennett threw the comments back at Cleary.

On Friday, the ordeal was the last thing he wanted to discuss before their season goes on the line against the Eels, with a succession of blunt responses to the Bennett saga, his team make-up, including his reason for benching Kikau, potential fatigue in his squad and Parramatta’s revival.

But he did insist the Panthers were relishing the challenge of having to play four straight weeks to win the grand final, and the prospect of toppling the Storm in a preliminary final if they can squeeze past the Eels in Mackay on Saturday night.

“The idea was to not have to play this week, but it’s a different path and we are playing,” Cleary said. “I think when you do lose it’s natural to want to get out there and perform better. That’s the whole focus this week. 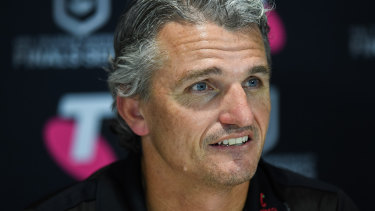 Ivan Cleary has tried to distance himself from the Wayne Bennett saga.Credit:Getty

“We’re feeling good. Last week was just a hiccup and we’ve just got to play better.”

Cleary confirmed fullback Dylan Edwards (foot), prop Moses Leota (calf) and Scott Sorensen (wrist) were all on track to return for the do-or-die game, which looms as a potential straight sets finals exit for the season-long title fancies.

Eels coach Brad Arthur said he plans to use the returning Ryan Matterson in an unfamiliar role for the crunch clash against the Panthers, stressing he was fed up talking about Parramatta’s botched finals campaign last year.

Matterson, who was left out of Parramatta’s squad for their gripping win over the Knights in week one of the finals despite being available after serving a three-match suspension, will return on the interchange at Mackay on Saturday night. 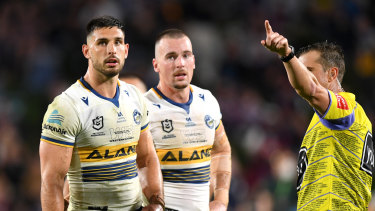 Ryan Matterson hasn’t played since being sent off against Manly last month.

But he won’t necessarily get the chance to play in his more familiar edge back row position, with Arthur planning to use him as part of his middle rotation against the likes of James Fisher-Harris, Moses Leota and Isaah Yeo.

“He’s been named to play on the bench and at some stage he will be put into the game,” Arthur said of Matterson. “It will probably be moreso in the middle so he can give us some fresh legs.“

Shaun Lane and Marata Niukore have been named as the starting second-rowers with Matterson, Bryce Cartwright and Isaiah Papali’i on the interchange.

Arthur was forced to defend his team’s recent finals record, which has resulted in a string of week two appearances without progressing to a grand final qualifier. They can inflict similar pain on the Panthers, tipped to go all the way by many experts.

“At the end of the day, in the last five years we’ve made week two [of the finals] four out of those five years,” Arthur said. “So we must be doing something right. There’s only a handful of clubs that have done that.

“We’ve got aspirations like every other team to go further. It’s not as easy as it looks. It’s hard work. You’ve got to beat a lot of good teams along the way. You need a bit to fall your way.

“I’m sick of talking about last year and what happened last year. There’s circumstances and there’s excuses, whatever way you want to look at it. What we need to do is play well. We need to start well and then we need to be able to maintain it for 80 minutes.”