Moses Mbye's days at the Wests Tigers could be coming to an end after he approached the club to seek permission to negotiate with rival teams for next season.

The former Wests Tigers skipper still has another year to run on his lucrative deal with the joint venture, however on Wednesday requested the blessing of the club to look at alternative options in 2022. 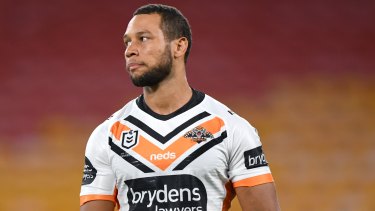 The Herald has been told the Tigers have granted the 27-year-old permission to talk to other clubs for next year. Mbye is on a deal worth around $800,000 next season, but has been relegated to the bench over the past fortnight and is being used as a utility.

The Herald contacted Mbye on Wednesday, with the former Origin centre admitting he had spoken to the club about a potential release for next year.

"Let's be brutally honest, I don't think the club would be thrilled that their marquee player is being used off the bench for half an hour a week," a forthright Mbye told the Herald.

"I'm not ashamed to admit that the club is not getting value for money out of me. I have a big opinion of the club and want to be part of its success. It's why I have no intention of leaving this year or leaving the club in a hole.

"But I know this opportunity can benefit the club as well as myself and it may work out a win-win situation for both parties. I get the opportunity to look around and find a club that wants me to play more minutes, and potentially even another year on top of my deal."

"If it doesn't work out elsewhere then I have no hesitations committing myself to the Tigers in 2022, but I feel it's an avenue worth exploring. The club has been very supportive and understanding of my situation and whatever the outcome there will be no issue between me and the Wests Tigers."

Sources with knowledge of discussions told the Herald the Tigers would be willing to pay up to half the 27-year-old's $800,000 salary next year should a club open formal discussions.

He joined the Tigers from the Bulldogs midway through 2018 and has been used in multiple positions, but hasn't managed to land a permanent spot due to his versatility. Coach Michael Maguire made Mbye captain when he joined the club in 2019, with veteran Benji Marshall added as co-captain last year.

“I’m not ashamed to admit that the club is not getting value for money out of me.”

Mbye stood down as captain at the end of last year and hasn’t been in the club’s leadership group since. The Queenslander has played 138 NRL games since his debut for the Bulldogs in 2014.

"I still feel like I have a lot to offer a club," Mbye said. "I know things haven't panned out the way I would have liked at the Tigers, but sometimes a fresh start can make a big difference and perhaps that's where I am at in life.

"I don't know what the future holds but I appreciate the honest conversations I've had with the Tigers. I'm not one to play games or beat around the bush. I'd rather be up front about where things are at and we'll see where things end up."

It comes on the same day a Cowboys official flew to Sydney to meet with a number of player agents, including Adam Reynolds’ manager Steve Gillis. The Cowboys are considering offering Reynolds a three-year deal as the Rabbitohs refuse to budge on their one-year offer.

As reported by the Herald last week, the Cowboys are also keeping a close eye on Luke Brooks’ future at the Wests Tigers. Brooks was under enormous pressure after the first two rounds but last week’s win against Newcastle will silence the critics for a short period. Brooks still has a close relationship with Payten, who coached the halfback in the juniors at the Tigers.