The Brownlow medallist and three-time North Smith medallist was arguably best on ground in the first half, but early in the third term went off with a tight hamstring. 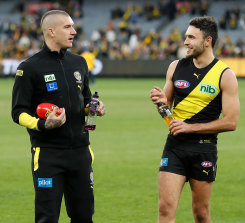 Dustin Martin in his tracksuit after the game, with Shane Edwards.Credit:AFL Photos

He was subbed out for Kane Lambert, with the club describing his injury as “hamstring awarness”.

Hardwick was unable to shed much light on whether Martin had suffered a strain.

“I think he’s just got tightness at this stage,” Hardwick said. “We’re pretty forthright with that sort of information, so once we know, you guys will know.”

Asked whether Martin was feeling tight at the main break, Hardwick said he picked up the issue in the third term.

“It was during the third quarter, so from our point of view it was in play,” he said. “It was [a cautious decision], but once again, we’ll figure out what it looks like.”

Hardwick said the club would consider taking a cautious approach ahead of next week’s big game against the Suns at Metricon Stadium.

“The medicos and strength and conditioning guys are A1 in what’s the best required treatment, regardless on the player’s status,” he said.

The champion midfielder was prolific in the opening half, amassing 17 disposals including 12 kicks, to go with four clearances, five inside-50s and a goal. 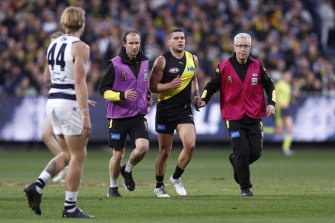 Dion Prestia is expected to return next week to face the Gold Coast Suns.Credit:Getty Images

“He was really good, electrifying, which was great,” Hardwick said. “He had his agility back, and the ability to move the ball and see the ground. His kicking was A1 today, so he had a good game.”

Dion Prestia is highly likely to return from a concussion next week, following last week’s bump from Tom Stewart that saw the Cats defender handed a four-week suspension by the AFL Tribunal.

Noah Balta, however, is still a week or two away from making his own return from a hamstring injury.

“We’ll make an assessment, similar sort of thing [to Martin], we won’t push him if he’s not right,” Hardwick said.

While Hardwick was pleased with the performance, in particular the games of Marlion Pickett and Daniel Rioli, he said the Eagles gave them a lot to think about.

“I thought West Coast were great today, and we’ve sort of known, the last three or four weeks when they get their squad back, they’re going to be a different side,” Hardwick said.

“It was challenging. If you look at a barometer to measure whose game looked like it more, I think it would be West Coast. They had polish in certain areas of the game, and we just couldn’t quite turn the ball over.”

Eagles coach Adam Simpson was glass half-full after the loss, saying he thought the players were better around the contest and gave their forwards supply.

“We didn’t kick straight, that always hurts,” Simpson said. “Richmond deserved to win, but we had moments in the game where we were on top.”

But a hamstring injury to Elliot Yeo compounded the result.

“He just can’t get a run at it, ‘Yeoy’. He’s been pretty good for us for three or four weeks,” Simpson said.

“Unfortunately, he got in an awkward position, got pushed in the back going full tilt, and it was one of those classic ones you know straight away.”

Simpson said Josh Kennedy – who was managed – simply needed a week off, and would return to face the Blues next week.