The Wests Tigers have hired one of Australia’s leading silks, who was part of Jack de Belin’s legal team when he challenged the NRL’s no-fault stand-down rule, in a bid to overturn the result of their controversial game against the Cowboys.

Yaseen Shariff, SC, who is one of the biggest hitters in Sydney’s legal fraternity, has been engaged by the Tigers as they await a report from the NRL on the concluding stages of last Sunday’s game in Townsville.

The move is seen as the most significant yet from the Tigers to have the two competition points stripped from the finals-bound Cowboys after Valentine Holmes kicked an after-the-siren penalty goal to win the game.

NRL head of football Graham Annesley acknowledged the decision from bunker official Ashley Klein to penalise Asu Kepaoa for obstructing Kyle Feldt after a short kick-off was wrong, but defended the right for the Cowboys to use a captain’s challenge on the play.

The club has now hired Shariff, who was appointed a special counsel in 2020, to act for them. The appointment is independent of Hagipantelis and his company. 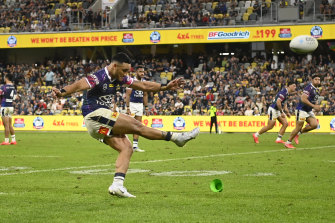 Shariff, who also provides legal advice to federal government departments, has recently represented the Seven Network in its legal battle against former presenter Simon Reeve. He was part of de Belin’s appeal team, which featured Arthur Moses and Timothy Kane, when the St George Illawarra forward launched a Federal Court appeal against the validity of the NRL’s no-fault stand-down policy.

De Belin spent more than two years on the sidelines as he faced sexual assault charges before returning to the NRL. He faced two court trials, but neither jury was able to reach a majority verdict. The Director of Public Prosecutions then dropped the charges altogether.

On Friday afternoon, the Tigers were still waiting for the NRL to send a report which included audio and transcripts of communication between players, referee Chris Butler and video review officials from the final minutes against the Cowboys.

The Tigers lodged a formal complaint with the NRL on Monday. The ARL Commission has asked for a full report on the incident.

‘I’ve been speaking every day with Graham [Annesley] and they’re committed to responding to our formal complaint.’

“I’ve been speaking every day with Graham [Annesley] and they’re committed to responding to our formal complaint,” Tigers chief executive Justin Pascoe said. “It’s important to us to make sure we receive the necessary material, as requested in our complaint, before we proceed to the next step.”

Klein was stood down from all refereeing and bunker duties this weekend. Butler will officiate the Knights-Bulldogs game in Newcastle on Sunday.

The Cowboys have said they will fight any push to have competition points taken from them. The Tigers would have climbed off the bottom of the ladder had they beaten Todd Payten’s side, in what would have been the upset of the season.

Sports lawyer Tim Fuller said the Tigers would have trouble overturning the result if, as the NRL said, the captain’s challenge was launched within the rules.

“If the shoe was on other foot, and it was accepted the captain’s challenge could not have been called, that’s the sort of situation where the Wests Tigers would have a case,” Fuller said. “If they were able to establish the NRL acted outside their rules, then that’s a different matter.

“It might not be too long before they get it wrong on a captain’s challenge where it’s allowed in the game and it’s outside the rules, and if it affects the game, absolutely a club could legally challenge it. They’re not immune to legal liability and we may well see a situation where a club challenges it and a result is reversed one day.”

Interim coach Brett Kimmorley will be back in charge of the side when they take on the Broncos at Suncorp Stadium on Saturday having missed the trip to Townsville due to COVID-19.