Imagine, for a moment, there was no Bunker for the final second of the Tigers-Cowboys match. Imagine there was no captain’s challenge. Play some thinking music if necessary.

Here is what I am imagining.

I’m imagining a short kick-off from Cowboys centre Valentine Holmes. I’m imagining his teammates running through, but some of them with different purposes. I’m imagining some want to weave through the forest of Tigers players to leap high and contest the ball. I’m also imagining one of them looking to trick the referee. I’m imagining one will try to run into the back of a defender and milk a penalty, setting up a relatively easy penalty kick to win the match.

I’m also imagining referee Chris Butler being all over this. He’s a senior referee who can spot a con job from a thousand miles, although in this moment he’s just a few metres away. He has the best seat in the house.

I’m imagining he doesn’t have the incessant chatter of a “referee coach” in the grandstand telling him what to do. He doesn’t have a person sitting in an office in Eveleigh waiting to pounce on any incorrect decision he might make.

It’s just him and a couple of touch judges, a whistle and years of experience to draw upon in any situation. They make decisions based purely on what they see and what they know. 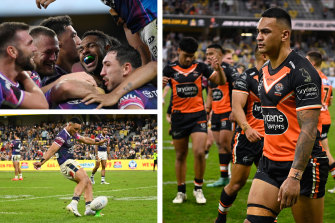 Wests Tigers lost by one point after a controversial penalty was awarded to the Cowboys with one second of the game left.Credit:Getty Images

I’m imagining the ball falls into the hands of Tigers fullback Daine Laurie. He is tackled, the siren sounds, the Tigers players celebrate like they’ve won the grand final. Captain James Tamou, in his 300th match, is grinning like the cat that got the cream, albeit a very large cat.

I’m imagining furious Cowboys players rush at Butler, claiming an escort penalty, but he is confident in himself and his touch judges and takes it for what it was: Kyle Feldt trying to milk a match-winning penalty by running into the back of Tigers centre Asu Kepaoa. “Nice try,” Butler says to Chad Townsend.

Imagine if that happened?

The narrative this week would be around the Tigers pulling off the upset of the season, a just reward for a club that’s been through hell.

Instead, the headlines scream about a code in crisis because of its rules, interpretations and crackdowns, and a club threatening legal action, as silly as that is.

People don’t know what they’re watching any more. They’re confused about what warrants a set restart, a sin bin or a send-off.

Did you know a team could ask for a captain’s challenge after the siren? I thought they could be issued only for a “stoppage in play”.

What would I know? What would you know? The NRL bangs out a wordy statement on Sunday night saying that stoppage includes the end of the game.

In other words, suck it up. Keep paying your memberships, your ridiculous prices for tickets, merchandise, hot chips and flat beer.

Oh, and while you’re shoving those $8 pies down your throat, cop the bad decisions on your second chin. It’s the game. It’s sport.

In the past month, ARL Commission chairman Peter V’landys, chief executive Andrew Abdo and head of football Graham Annesley have bemoaned the shit-stream of talk about match officials.

“This game has an ability beyond any other that I’ve ever witnessed – and I’ve seen sports all around the world – to focus in on officiating like I’ve not seen in any other sport,” Annesley said just a week ago.

When will the NRL stop being so defensive about its rules, when will it stop dismissing its fans like they are whinging children, and do something about it? 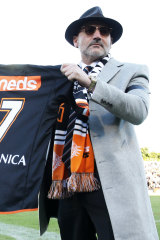 There’s a clear distinction between referee bashing, the oldest trick in the book from coaches trying to divert attention from their side’s performance, and serious issues with the way the game is officiated.

Never one to back away from a fight, Tigers chairman Lee Hagipantelis — who is also the principal at Brydens Lawyers — has threatened legal action.

I’m no sports lawyer but the ones I know have already laughed off the suggestion. Unless the Tigers can prove some sort of fraudulent activity, it will amount to naught. Makes for good copy, though.

In 2019, a group of New Orleans fans launched a class action against the NFL after officials failed to penalise the Los Angeles Rams for pass interference in the dying seconds of the NFC Championship game.

It cost the Saints the chance of reaching the Super Bowl, and a group of wealthy fans wanted the match replayed.

Nothing came of it so the fans bought advertising space on billboards around Atlanta, the Super Bowl host city, complaining about the result.

No sport is immune to refereeing controversy. As long as humans are making decisions, there will be human error.

Match officials also need to be respected. I’d argue no sport makes its officials wear ugly abuse more than tennis, where you can essentially say anything to the chair umpire with impunity or a paltry fine.

In rugby league, the blowtorch needs to be applied to the administrators who keep adding or changing the rule book. Instead of solving problems, they make more.

When rugby league is played at its free-flowing best, without pedantic over-officiating, there is no sport like it. Witness Origin III.

The problem is fans have diminishing confidence in the result being determined by the players.

A listener on SEN Radio on Monday morning suggested abandoning the Bunker and captain’s challenge for matches between teams out of finals contention.