Home » Rugby » Tigers down Port with final flourish, Power’s season in the balance

Richmond set up a blockbuster Thursday night clash against Carlton next week after holding off Port Adelaide to storm into the eight and leave the Power’s finals prospects hanging by a thread.

After giving up a 31-point lead in Sydney two weeks ago, the Tigers again failed to put their opponent away, watching a 26-point advantage evaporate before finding a final flourish to prevail by two goals. 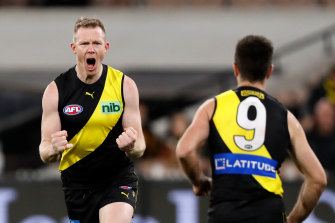 Jack Riewoldt and the Tigers are back in the eight.Credit:Getty Images

Only 21,757 braved a chilly night at the MCG, but there will be more than double that when they take on fierce rivals Carlton in a game that is shaping to have big ramifications on the eight.

In much-loved backman Dylan Grimes’ 200th game, the Tigers won in a manner befitting their triple-premiership milestone man. Nothing came easy as they were forced to scrap hard by a Power team that kept coming despite appearing beaten several times.

Damien Hardwick’s men are not the team they were a few years ago, but equally no team will enjoy facing them. In big moments, their key players stepped up. Dustin Martin kicked a vital goal in the last quarter, keeping his feet after his opponent fell.

Port blew their chance to reach parity and, at 5-7, face an uphill task to book another finals campaign. 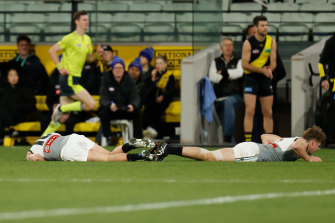 Their key moment came when they lost two men and gave up a goal in the last term to Martin. Tom Jonas and Zak Butters clashed heads trying to tackle Liam Baker, spending important minutes off the field while the game was on the line.

There will likely be scrutiny from the AFL given the pair returned to the field and concussion protocols were not enacted.

Richmond’s early dominance was built on their trademark pressure around the ball. It did not matter that they were being beaten for clearances and contested ball. All five of their goals in the first quarter came from turnovers.

Such was the heat put on Port, panicked Power players regularly dumped long kicks inside 50, playing into the hands of the Tigers’ numbers behind the ball. 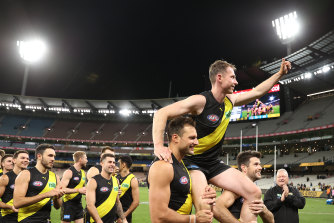 Dylan Grimes is chaired off in game 200.Credit:AFL Photos

It was not until red time in the second quarter when Ken Hinkley’s men belatedly cracked the Tigers’ code, deploying a more thoughtful and patient approach to goal. They had the smarts by switching play to widen the Tigers’ zone and the skill to find players leading into the pockets of space created.

Richmond’s era was not built on stoppage work but Port’s contested numbers, of plus-17, and plus-70 possession count painted a worrying picture. In Marshall, who kicked three goals in the first half, Port had a forward capable of taking the game from them if they did not lift around the ball.

How important is a ruckman? If this game is a guide, perhaps not very. Port went into the game without a specialist ruckman, content for forwards Jeremy Finlayson and Charlie Dixon to shape up against Toby Nankervis and Ivan Soldo. As expected, the Tigers dominated the hitouts, but this did not translate to the clearances, which Port won 39-30. Finlayson and Dixon kicked two goals between them but Nankervis and Soldo took key marks behind the play, so arguably honours were even.

Whatever Judson Clarke does in his career, he’s got something over Lance Franklin, Tony Lockett and Gary Ablett. Actually, make that all six members of the game’s 1000-goal club. The Tiger teen had a dream start to his debut, booting goals with his first two kicks. Only 31 players have achieved this rare feat – a list that does not include some of the game’s greatest goalkickers. Lockett, Doug Wade, Jason Dunstall and Gordon Coventry are among the 302 documented players (before this season) to have scored a goal with their first kick at senior level. Such was Clarke’s confidence, he even had the audacity to ignore Martin flying by for a handball. 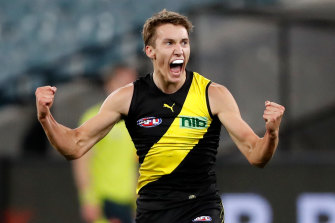