Richmond star Dustin Martin has returned to Punt Road for a second training session in a matter of days, taking part in a running session on Anzac Day after ending an indefinite absence from the club on the weekend.

Martin joined teammate Josh Caddy at the club on Monday morning, but there is still no clear timeline on his return to the AFL team after he spent the last month away from Richmond due to personal reasons.

The Tigers had a day off on Anzac Day due to their Anzac eve match on Sunday night, meaning few staff or players were in attendance when Martin hit the training track again. 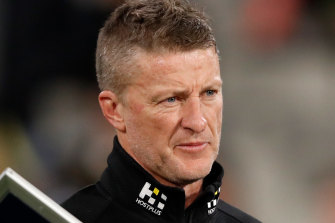 Damien Hardwick (pictured) said there was “no question” the Tigers were “absolutely” pleased to see Dustin Martin on Saturday.Credit:AFL Photos

The presence of Martin at Tigerland on Saturday was a boost for his teammates, but coach Damien Hardwick could not provide any clarity on when he will return to the fray.

The triple-Norm Smith medallist ended his stint away from Punt Road when attending a training session the day before the Tigers’ 22-point loss to Melbourne on Sunday night.

The 30-year-old has not played since Richmond’s opening round loss to Carlton, opting to take leave as he continues to mourn the death of his father, Shane.

The three-time premiership Tiger has spent time with family in Sydney but returned to Melbourne last week and was spotted training in a gym prior to Saturday’s session.

Hardwick was restrained when commenting on the champion, keeping his answers short following the loss to the Demons which leaves Richmond adrift of the eight in 12th position.

He said there was “no question” the Tigers were “absolutely” pleased to see Martin on Saturday.

But when asked whether Martin has any chance of returning against West Coast in Perth on Friday night, Hardwick said he did not know when he would play again.

Kane Lambert was held over from a VFL match on Sunday in the hope he will be available to take on the Eagles in what is a critical clash for both clubs given their struggles this season.

“Once again, it was a five-day break, so if he played today, he was no chance of playing over in Perth,” Hardwick said. 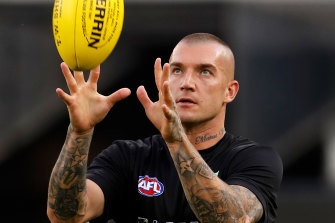 The 30-year-old has not played since Richmond’s opening round loss to Carlton.Credit:AFL Photos

“We will try to get him through training and see how he goes. He just didn’t quite look comfortable enough … last week.

“He will have a run around (on Monday) and try (to) prove his fitness. We have a short session planned, so we have to make a call one way or the other pretty early.”

The Richmond coach was frustrated the Tigers did not play with more boldness early when arguably on top of Melbourne in the opening term.

But he feels there are signs the Tigers, who are one win outside the eight, can become a more formidable team if they can find greater consistency across the ground.

“What we have got to remember is that we have played a really good side that will put a lot of sides to the sword this year and we got within 20 points.

“The scoreboard probably flattered us a little bit, but there are some signs that we are going OK in various areas.”

Thomson Dow was substituted from the match with a corked thigh, with Hardwick saying he was unlikely to be available for the clash against the Eagles.

Although Melbourne was wildly inaccurate in the first half, coach Simon Goodwin was pleased with the professionalism of his side as they moved to a 6-0 record for the second straight season. 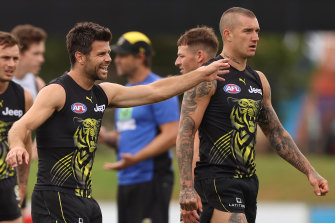 Martin opted to take leave as he continues to mourn the death of his father Shane Martin last December.Credit:Getty Images

He sits second on Melbourne’s goal-kicking table this year with eight goals from four matches, six behind Bayley Fritsch, who added two to his tally against Richmond.

“Obviously when you miss out on (an) opportunity, and you have some things to work on, it is up to the individual and to the coaches around him … to go away and work on his game,” he said.

“I think he has just reminded everyone of the talent that he has got and his ability to keep impacting games.”