A prop who ‘tackles 100 per cent every time’, a scrum half who can do everything, and an ‘un-coachable’ superstar winger: Three Springboks for the Lions to watch out for ahead of the first Test

The British and Irish Lions have made a strong impression on their South Africa tour so far. Demolishing the provincial teams that have served as warm-up fodder, coach Warren Gatland has a huge plethora of exciting players to choose from ahead of the first Test against South Africa on July 24.

However, the Lions were beaten in their sternest test on tour so far by South Africa A, which served as a warning that Rassie Erasmus’ Springboks are as fired up for the contest as the men in red.

Here, Peter de Villiers, the first ever black national rugby coach, tells Sportsmail the three Springbok dangermen the Lions must look out for. 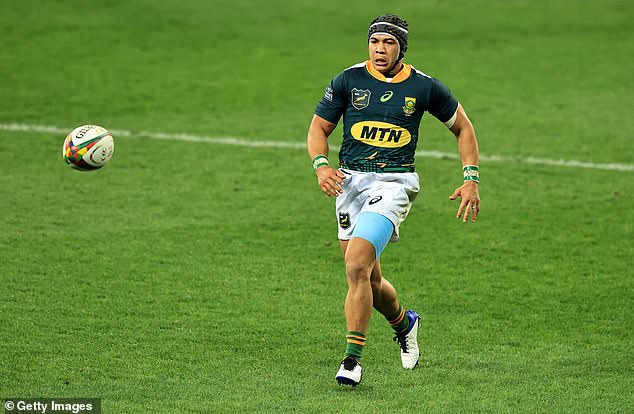 This is a guy who has a hell of a big influence on the players around him. He is a very honest rugby player. An honest player is someone who tackles 100% every time and cares deeply about the team. He does his principle requirements for a prop brilliantly and adds to the game with his aggro.

I love a scrum half who can score tries and this man scores tries. You can’t rely on your wings to score all of your tries in a big match. Justin Marshall was the same playing for the All Blacks. Jantjies can do everything the other guy can do but he also scores and that can prove the difference at the top level.

Wow. The guy is un-coachable. He will adapt to the situation and when you need him most he will make a plan. To get the best out of Kolbe (right), you need an inside centre who is a good creator and a full back who can open up spaces for him. A player like Cheslin does not come around often.