The Penrith Panthers have been rewarded for their dominance with Brian To'o, Liam Martin and Jarome Luai named to make their State of Origin debuts next Wednesday night.

It comes as the NRL prepares to make a decision on the venue for the opening game of the series on Monday afternoon, with Melbourne's COVID-19 outbreak likely to see the match moved from Victoria to Townsville. 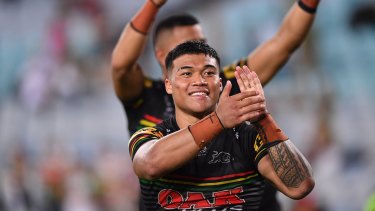 The NSW back-row bench spot appeared a three-way battle between Martin, Tevita Pangai jnr and Tariq Sims, but it was the Dragons veteran who won the nod over his younger counterparts given his experience in the arena. The injury to Frizell saw Sims move into the starting side and Martin to the bench.

While Origin looks set to be played in Queensland the first two games of the series, the NSW government has launched a last ditch bid to nab the opening game of the series if the NRL is forced out of its deal with the Melbourne Cricket Ground.

"It would make it infinitely harder but carrying an underdog tag in State of Origin has always been a good thing, so I'll accept that," Fittler said of the prospect of back-to-back games in Queensland.

Meanwhile, Queensland star Kalyn Ponga has said he will be available for the Maroons despite withdrawing from Newcastle’s game against Manly with an ongoing groin problem.

“I should be fit,” Ponga said. “Hopefully I get the call and then it’s about doing everything right to be able to play. It’s been tough because when you’re not playing you still have to train just as hard. That will put me in good stead.

“Fitness is a big thing, but it has never really been my issue. I’ve been keeping fit even though I haven’t been playing. When your team is not going well and you can’t have any input or a say in the results, it’s frustrating.”